Of Tortes and Cakes 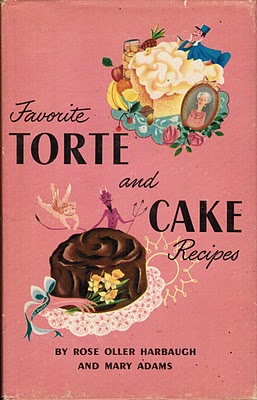 The authors ask, “What happier cooking experience is there than the joy of making a perfect cake?”  The book was published in 1951, when not many people made cakes from mixes.  These recipes are the real thing, all 232 of them.  Back in the 50’s, most women made cakes from scratch.  Homemade cakes were a popular item to enter in contests like the Pillsbury Bake-Off.  It took the public some time before mixes were acceptable.  Early mixes that were marketed contained powdered eggs and all the consumer had to do was add water.  Consumer testing later showed that people accepted mixes if they could add their own fresh eggs.  The powdered eggs were removed and the rest is history.  Cake mixes have continued to change and improve over the decades.  Does anyone remember the “Stir ‘n Frost” mixes from the ’70’s which had the foil pan, cake mix, and ready-to-spread frosting all in one package?  Or when the addition of pudding became a staple in mixes?
I wonder what the authors, Rose Oller Harbaugh and Mary Adams thought of the mix revolution.  Their book was released before mixes were staples on shelves- and thank goodness for books like this. I found this autographed copy in an antique store, which was hard to miss with the bright pink cover and charming illustrations.  Mary Adams’ family came to this country from Budapest when she was a child, and she grew up learning her mother’s Hungarian cooking.  Many of the recipes in the book were used in the pastry and chocolate shops in Hungary.  Rose Oller Harbaugh was well known in the book profession as the manager of Marshall Field’s book section.  She served on a committee of American booksellers, which presented books to President Harry Truman for the “Home Library of the White House.”  I don’t know if this book was included in the White House library, but from what I have found by googling, President Truman had a sweet tooth and probably would have loved the cakes in this book. 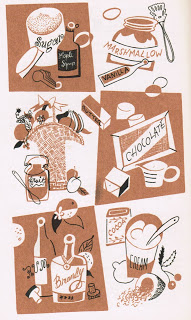 2 Responses to Of Tortes and Cakes