Oh, Sphere, Where Art Thou? Part 2

I posted a blog way back in March of 2010 about my obsession with the long ago and wonderful magazine, Sphere, which I love dearly.  I couldn’t believe the response I got from that blog.  It seems there are many, many Sphere lovers out there.  I have dozens of emails waiting for me to answer.  People write saying it was their favorite magazine and they lost their favorite recipe – and please, Culinary Cellar, can you find it for me??  I have been able to find some, but not all of the requested recipes. 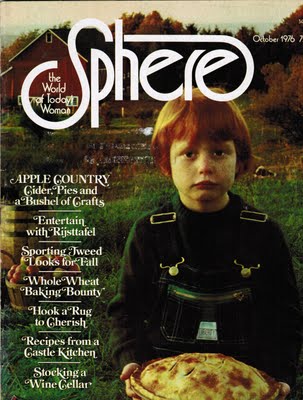 This is the October 1976 issue, from which I found a recipe in a request dated last December.  I received a heartfelt and sweet note from a couple requesting the “Spicy Wheat Snaps” cookies.  I was so happy to mail them the recipe just today.  I can’t wait to hear back from them.  But let’s backtrack a little and tell you how I happened to score this issue.  One of my loyal readers, Lois from Michigan, wrote me an email and said she was cleaning out some areas in her home when she found her old issues of Sphere and Cuisine (more on that below), which she loved, too, but was trying to get rid of things and have less clutter.  I wrote to her immediately and asked (almost begged!) to buy her issues that she didn’t want any longer.  Sweet, sweet Lois, wrote back and said she would be happy to sell them to me.  She made my culinary life!  I never tire of thumbing through the magazines and trying the recipes, some that I also had lost and was happy to find.  Thank you so much, Lois!
Sphere debuted back in 1972, changed it’s name to “Sphere’s Cuisine” in the October issue of 1978, then it became just “Cuisine” in the January 1979 issue.  Unfortunately, it only lasted about a decade, and now is gone forever.  I think the Sphere and Cuisine (not to be confused with the “Cuisine” magazine today) were the best food magazines ever published.  I love filling recipe requests when I can from other Sphere lovers.  However, I can’t fill them all, because I don’t have all the issues.  So now, I am going to put my own request out there for anyone who has extra copies, copies no longer wanted, or even if you come across some at book sales or antique stores, that you would sell me.  I would love to complete my collection of Sphere and Cuisine.  Here is my list of what I am missing:
Sphere:  I need the following:
-Every issue from years 1972, 1973, and 1975.
-From 1974, I need issues January, February, March, April, May, June, November, and December.
-From 1976, I need issues January, February, March, April, May, June, July, August, and September.
-From 1978, I need issues January, February, March, June, July, and August.
Cuisine:  I need the following:
-From 1980, I need January and February
-From 1981, I need just November
(Note:  Some of the Cuisines combined issues, so the 1980 one may say January/February, and the November issue may say November/December)
I am hoping there is another person out there like Lois!  Please email me if you would like to sell me any of these issues, of course in good condition and not missing any pages.  And lucky you if you have them all and cook from them.  You would understand why I want to own every issue!

My Power is Back On!! Time for a Good Cookie..
Melons in the Summer

2 Responses to Oh, Sphere, Where Art Thou? Part 2