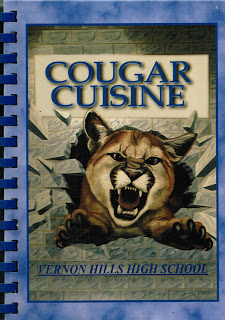 First of all, my daughters are going to wonder why I am writing about their rival high school.  This school was a sister school to Libertyville High School where my girls graduated.  Libertyville H.S. grew too large in population and another school had to built nearby.  Since it was a new school, there were always fund raisers for the various extracurricular activities.  I happened to be a substitute teacher at that time, and worked at both schools for several years.

The cookbook is filled with all the usual fare of high school life, such as salsas, guacamole, quick breads, dips, won tons, pasta salads, coffee cakes, pizza, and sandwiches.  I bought this cookbook to help support the causes, but  I also happen to like community and school cookbooks, plus I really just like high school kids.  I chose to substitute teach at the high school level because I enjoy watching the process of the students change from freshman year to senior year.  They grow up so fast and it can be a bumpy ride, but always an interesting one.  If you know one thing about high school kids, they are never ones to mince words.  One time in a history class we were discussing all the presidents.  One student raised his hand and asked who was President when I was born.  I told him it was Harry Truman, right before Eisenhower was elected.  The room became silent, the boy looked around at his friends, turned back to me with big eyes and said – “How old ARE you??

Kids…. don’t you love them?

And don’t worry girls, my heart will always be with the Libertyville Wildcats.