The Fork Ran Away with the Spoon 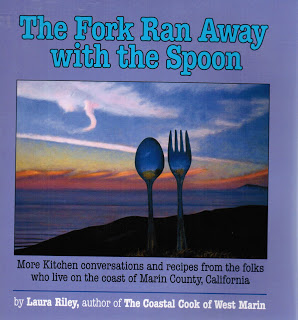 This is a cookbook you can read like a novel.  It has marvelous recipes, but you can also read about the fascinating residents of West Marin County, California.  West Marin has a mystique all its own.  It is said that if you dine well in San Francisco, most likely the ingredients came from West Marin, such as oysters, designer lettuces, wine, cream, cheeses, and beef.  Some even believe that one would be hard pressed to find a terrain as gastronomically blessed this side of Provence.  But along with its elevated food consciousness, it is also the diversity of the people that makes the population of West Marin so fascinating.  Next to each recipe is a biography of the person who submitted a favorite dish.  When reading about Marjorie F., you learn that she is movie buff and a Cordon Bleu-trained chef, where she learned the basics of French cooking and dessert making.  She offers you her recipe for blueberry cream scones.  Lou P. discovered the names of two relatives on the passenger list of the Mayflower, which is probably why her recipe is called Plymouth Plantation Hasty Pudding.  Gene P. teaches Shakespeare classes and studied in college with Robin Williams.  He has a great recipe for his family’s barbecue sauce.  The cookbook has many vegetarian recipes, but also has seafood, meat, poultry, breakfast, soups, salads, and some delightful comfort desserts.  This is a cookbook about interesting people and their love of great food, which they want to share with you.  Take them up on it.

Laura Riley, Marin County California, The Fork Ran Away with the Spoon