The Joy of Church Cookbooks – Amen to That!

There are some cookbook enthusiasts who collect only church cookbooks. Church publications have always been popular and well-received, from every tiny rural church to the massive city cathedrals that publish their own cookbook as a fundraiser.  Some books are nothing more than some xeroxed sheets stapled together, while others are big, spiral-bound, professional-looking books.  One collector told me she loves church cookbooks more than others because she hopes to find those elusive, secret recipes that a person might not be willing to normally reveal, but the church cookbook seems safe.  Church cookbooks also contain many family recipes handed down through the generations. 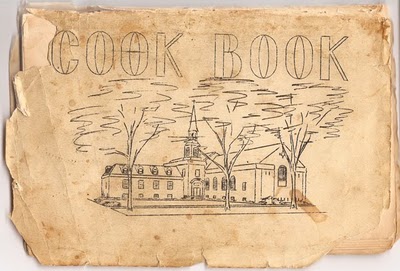 My first encounter with a church cookbook was one that my mother helped work on back in the early 60’s at the Elmhurst Methodist Church in Elmhurst, Illinois.  It was not one of the fancy ones, it was one of those stapled together ones.  Oh, but it was loved and used.  The copy I have is yellowed, torn, and falling apart.  Before that one, the church published a small spiral-bound cookbook in the early 50’s.  In it, there is a photo of the minister who baptized me.  Since this was a more expensive cookbook, ads had to be sold to help pay for printing costs.  I love reading the advertisements for all the various businesses at the time.  There is one for Hegstrom’s Sunset Dairy Store.  Every Sunday after church, we would stop in the tiny store for milk, and my mom would let me buy salted pumpkin seeds, which I thought were a delicacy.  The store was owned by Mr. Hegstrom, but I never got his name right and always called him Mr. Egg Crumbs.  An ad for the York Theatre, which is still in operation to this day, advertises the cost:  35 cents for a movie, which was 29 cents for the movie plus 6 cents in federal tax.  It is these kinds of memories that make church cookbooks so cherished by many people. 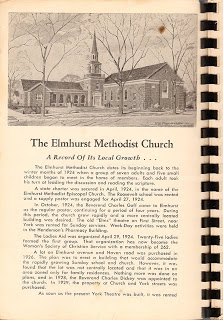 I have many church cookbooks from all over the country.  Another favorite is one from a Swedish church in Chicago published in 1943.  As you can assume, it is filled with authentic Swedish breads, meatballs, butter cookies, and rice puddings.  Every single contributor has a Swedish last name.  My husband’s Aunt Alda from West Bend, Wisconsin had a church cookbook that contains many German recipes.  She was especially fond of kuchen, and literally took every kuchen recipe in the book (and there were many), tore them out, and clipped them all at the front of the book so she could find them instantly.  My sister-in-law, Ellen, from Oklahoma, sent me her church cookbook about 20 years ago, and it’s about as big as a bible!  She made notations on some of the best recipes and I still use the one for German hot potato salad. 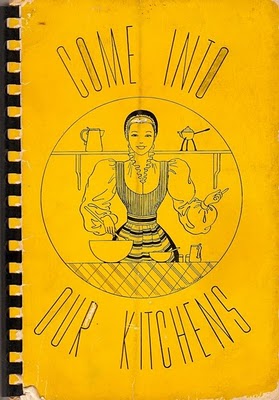 Church cookbooks can take a lot of effort, which I know firsthand.  My friend Jean and I put together at least three for our church.   They were all a big success and appreciated, but what a lot of work!  Jean and I would wonder why we ever did more than one.  But I think we know why.  Church cookbooks are memories of people and places, not just the recipes.  I look at them now and see the names of special people who have passed away, but they left everyone a part of themselves with their favorite recipe they prepared for their families.  And they all taste like a little bit of Heaven.

4 Responses to The Joy of Church Cookbooks – Amen to That!