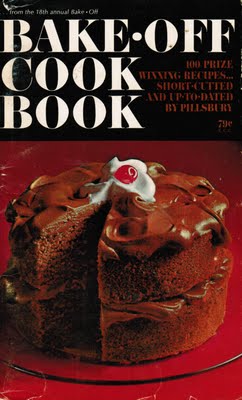 Mrs. Maxine Bullock of Topeka, Kansas, said a lapse of memory turned into a $25,000 grand prize win at the 18th Pillsbury Bake-Off in 1967. The mother of three came up with her “Muffin Mix Buffet Bread” one night when she forgot to take bread out of the freezer for dinner, and in the process of making up the recipe in place of the loaf of bread, she “found a way to get my youngsters to eat vegetables.”
The winning bread uses yeast, Pillsbury’s Golden Corn Muffin mix, flour, butter, and a can of condensed cream of vegetable soup, which proved popular with her family.  Apparently the judges liked it, too.  The bread is formed into a rectangle, cut into strips, then placed in loaf pans.  Pillsbury called it a “break-away
loaf.”  The condensed cream of vegetable soup called for in the original recipe is no longer available, but Pillsbury has updated it for today’s use, using condensed cheddar cheese soup instead.  Maxine continued to enjoy cooking contests after the Bake-Off.  I found a 1985 article from a National Chicken Cooking Contest where Maxine won a $1,000 prize for her spicy herb-broiled chicken. 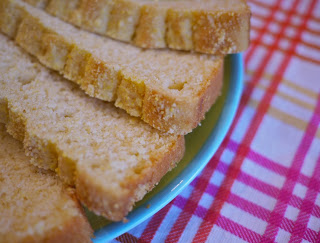 The recipes from this Bake-Off emphasized the use of Pillsbury’s convenience products to “give the same appetizing foods your family will love in a time-saving way.”  Recipes used muffin mixes, pancake mixes, frosting mixes, many canned goods- especially condensed soups, mashed potato flakes, and cake mixes.  This book also has more food photographs than I have seen in the past.  All the recipes looked very home-style, comforting, and appealing, which I think is what Pillsbury wanted – good food made easier with convenience products. 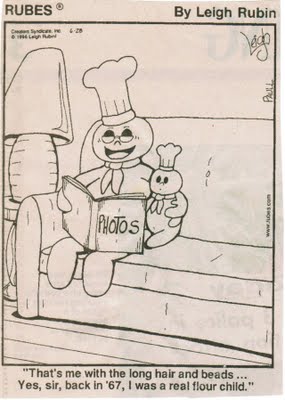 Tucked into this book was a cartoon which I obviously cut out of a newspaper long ago and kept inside since it mentioned 1967, the same year as this Bake-Off.  The year 1967 also holds fond memories from one former contestant, who I was lucky enough to talk with about her first Bake-Off experience, competing in the junior division.  Being a minor, the contestant was required to be accompanied by a parent.  The flight to Los Angeles for this contest was the first time on an airplane for both mother and daughter. Imagine a young girl flying for the first time, going to an event like the Bake-Off, meeting host Art Linkletter and actor Howard Duff, and watching the Lennon Sisters perform at one of the dinners- and a gourmet dinner it was, with crab legs,  roast beef with Madeira, and from sponsor General Electric, a “Bombe” for dessert!  I asked her how she came about at such a young age to enter the Bake-Off.  It seems while babysitting, the family happened to have one of the Bake-Off cookbooks and she decided to read it.  Later, upon opening a bag of Pillsbury flour, there was an entry blank for the Bake-Off in the bag.  Remembering the cookbook she read, she decided to enter. 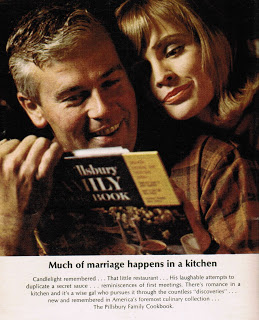 This book has an advertisement at the back of the book that I can’t help but mention, as it shows the sign of the times!  It was an ad to sell the newest Pillsbury Family Cookbook with an insert to order the book.  As you can see, the title is “Much of  Marriage Happens in a Kitchen.”  The amusing paragraph below it reads as follows:
Candlelight remembered….That little restaurant…. His laughable attempts to duplicate a secret sauce…. reminiscences of first meetings.  There’s romance in a kitchen and it’s a wise gal who pursues it through the countless “discoveries”… new and remembered in America’s foremost culinary collection…. The Pillsbury Family Cookbook.”
We’ve come a long way, baby…
To read about the Pillsbury Bake-Off go to http://www.bakeoff.com/
Photo of the Muffin Mix Buffet Bread is by my daughter, Kristina Vanni. Visit her blog at: http://www.betterrecipes.com/blogs/daily-dish

To find Maxine’s updated recipe for her winning recipe go to http://su.pr/1SHGmL

Recipes from a (vegan) Soul Man
Can you take the Heat?