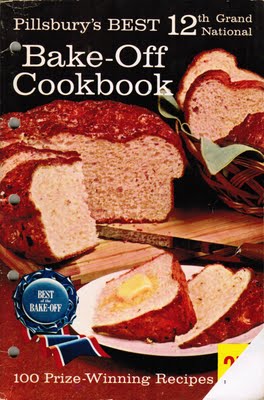 Mrs. Leona Schnuelle is the only Pillsbury Bake-Off Grand Prize winner who was presented her winning check for $25,000 by the then Treasurer of the United States, Ivy Baker Priest,  seen here with Mrs. Schnuelle and host Art Linkletter.  Since this contest was held in Washington, D.C., it made sense to have the official signer of our nation’s currency hand over the check! 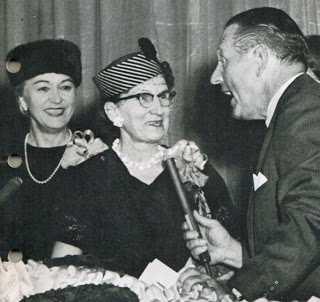 It may have taken Leona nine attempts before she finally made it into the Bake-Off, but she was by no means a newbie in the contest world.  Leona had previously won $500 for judging cattle, a vacation to Florida, furniture, and an assortment of appliances.  Leona, a Nebraska farmer’s wife, experimented with an old family recipe until she perfected her “Dilly Casserole Bread.”  After eight hours of sampling, the judges of this contest thought dilly bread would be “an ideal bread to serve at barbecues and luncheons,” and liked that it required no kneading and was baked in a casserole dish.  As one judge remarked, “Any dish with casserole in the title these days is a shoo-in.”  Ah, yes, we are still in the early ’60’s! 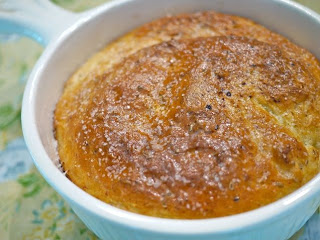 This beautiful bread is what is called a batter bread.  Unlike quick breads, this one relies on yeast for leavening, yet it is not kneaded like most yeast breads.  The dough is beaten in a mixer and baked in a casserole dish.  The secret ingredient is the cottage cheese.  It adds a delightful tang and makes a unique soft crumb to the dough.  It’s airy, fragrant, and absolutely fabulous.  I can almost taste it now. 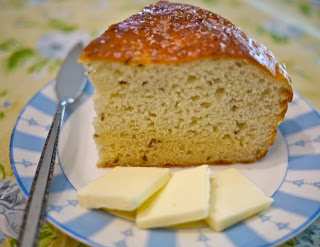 I have a heartfelt connection to this bread.  It was one of my grandmother’s all time favorite bread recipes,   and I can still see her making it.  In later years she lived with me, my husband, and two daughters, and continued to make the bread.  Somewhere along the way, she hand-wrote the recipe, below, and loved it so much, she figured out how to double and triple it!  Grandma loved cottage cheese and would have it almost every morning, but she always set some aside so she could make her dilly bread.  There isn’t a time when I make this bread that I don’t expect Grandma to poke her head around the kitchen door and say, “Do I smell dilly bread baking?!”  I still miss my Grandma so much, but I know she’s always with me when I make this bread. 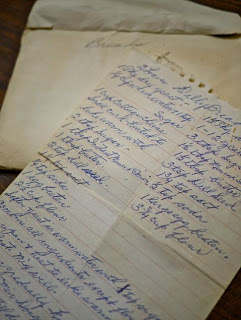 Leona’s incredible bread was selected for Pillsbury’s Hall of Fame.  Aptly enough, the first ten recipes selected for the Hall of Fame were invited to Washington, D.C, the city where Leona won, for the induction ceremony.  Leona’s daughter, Phyllis Engelman of Janson, Nebraska accepted the honor on behalf of her mother.  I’m sure the family knows how Leona’s bread still graces many tables all over the country.  I tracked down a sweet story about Leona.  Back in 1961, some of the previous winners were invited to tour the Pillsbury kitchens.  After the tour, Leona sent her tour guide a thank you note along with a handkerchief trimmed in lace.  A gracious and kind gesture from a wonderful home cook.
There was only one man in this Bake-Off contest, U.S Navy Chief Petty Officer Ramon Cabalona, who was the chief steward aboard the submarine U.S.S. Catfish.  He won a $1,000 for his orange cream pie topped with a meringue- called, of course, “Sub-Meringue Pie.”  It was also rumored that Ramon had the neatest and cleanest work area at the Bake-Off, no doubt because of his experience in a submarine galley kitchen!
Here are the other prize winners of this Bake-Off:
-Senior Best of Class winner “Sweet Surprise Rolls” by Mrs. John LaGrand Solomon of Long Beach, California
-Senior Third Prize winner “Clover Cheese Rolls” by Hazel Westbrook of Tiburon, California
-Junior Second Prize winner “Pick-Up-Sticks” by Marilyn Fletcher of Harrisburg, Pennsylvania
-Junior First Prize winner “Polynesian Tuna Bake” by Karan Sprengle of Pomona, California
-Second Grand Prize winner “Chocolate Macaroon Cake” by Frances Roek of East Detroit, Michigan
-Senior Best of Class winner “Toasted Butter Pecan Cake” by Bertha Campbell of San Benito, Texas
-Junior Third Prize winner “Peanut Buttercups” by Lillian Kroupa of Cedar, Michigan
-Senior Second Prize winner “Bake-Off Date Torte” by Lillian Schlueter of St. Louis, Missouri
-Senior Best of Class winner “Checker Bars” by Geraldine Goleman of San Antonio, Texas
-Senior First Prize winner “Angel Cheese Cake Pie” by Vera Massie of Springfield, Ohio
-Senior Best of Class winner “Sub-Meringue Pie” by Ramon Cabalona of San Francisco, California
To read more about the Pillsbury Bake-Off go to:  http://www.bakeoff.com/
To get the recipe for Dilly Casserole Bread go to:

To read my blogs from previous Bake-Off contests go to:
Bake-Off #1: http://su.pr/7gmylO

Bake-Off food photos are taken by my daughter, Kristina Vanni.  To read her blog go to:
http://www.betterrecipes.com/blogs/daily-dish/