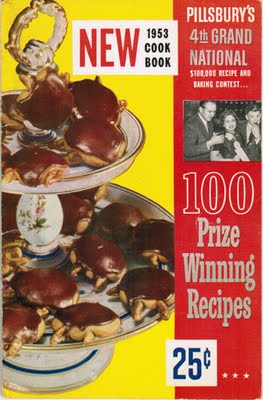 Josephine DeMarco (Jo) of Chicago was the first person I ever met who was a contestant in an early Bake-Off contest.  We met at a state beef competition back in the early 1980’s.  Despite our age difference, Jo and I became fast friends.  After meeting at the beef contest, we kept in touch frequently just to chat about our love of food, cooking, and cooking contests.  One contest she always loved talking about was this 4th Grand National, her first Pillsbury Bake-Off experience.  How I wish I had taken notes!  Jo was sweet and chatty and we could talk Bake-Off for hours.  Jo loved everything about the contest.  She raved about how the contestants had breakfast-in-bed at the Waldorf and how special it was.  Turns out, it was not only special for the contestants, but it was something ground-breaking for the entire hotel industry.  The Waldorf-Astoria was the first hotel in the country to offer room service, making a huge impact on the future of all hotels.  The Waldorf wanted luxury, and breakfast-in-bed was considered a supreme luxury.  Jo also was a friend of the Grand Prize Winner of this contest, Mrs. Peter (Beatrice) Harlib, below, who won the $25,000 for her “Snappy Turtle Cookies.” 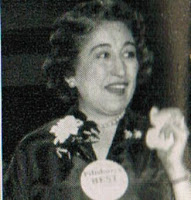 Mrs. Harlib was the wife of a Chicago police officer and mother to 10-year-old twin boys.  She says the inspiration for the winning cookie came when one of the twins rolled some cookie dough she was making into a round shape and used  pecans for the legs.  It was a clever and tasty cookie, but Jo said there was a problem.  Seems the De Met company that makes the famous turtle candies, which look like the cookie, did not take kindly to something else be called a “turtle.”  Jo said it caused a bit of a ruckus in Chicago and the story made the newspapers, but in the end, if you have this particular book, look at the bottom of the recipe.  There is a disclaimer that states “Not to be confused with “TURTLES” brand candies made exclusively by De Met’s, Inc. of Chicago, Illinois.” 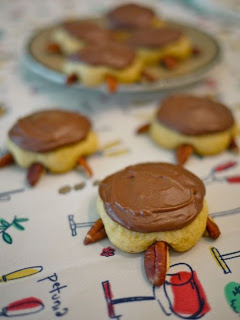 What do you think?  Do they look similar?  Both look pretty yummy! 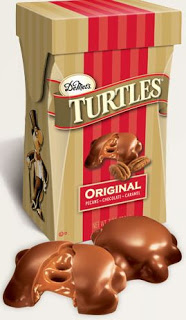 While I was searching the Pillsbury site for the “Snappy Turtle Cookie” recipe, I came across an amazing post on the “Pillsbury Community” area written back on March 31, 2010.  It was from a woman named Ellen Clarke Daugherty Lathlean, who was a contestant as a young girl at this Bake-Off!  Her recipe is for “Wheat Sweets,” a variation of Mexican anise-flavored “biscochitos.”  Ellen talked about how she loved the breakfast-in-bed, which again shows how impressed and excited the contestants were about this luxury!  She loved meeting Art Linkletter, Mr. Phillip Pillsbury, and Patricia Nixon, who was the wife of Vice-President elect, Richard Nixon.  Mrs. Nixon also was the presenter of the check to Mrs. Harlib.  Ellen went to the Pillsbury Community site to see if she could find other contestants from this 4th contest.  I tried to find Ellen on the internet, but had no luck.  I hope somehow she reads this and maybe she will write and tell us more about her wonderful and memorable experience.  She said she is 75 years old and still loves to cook!
Here are the other winners of Grand National Bake-Off # 4:
-$7,500 winner:  Two-Crust Slice ‘O Lemon Pie, from Mrs. Charles Reppert of Port Washington, NY
-$2,500 winner: Meringue Cradle Cake, from Mrs. Stephen A. Hornung of New York, NY
-$1,000 winner:  Peanut Brittle Cookies, from Mrs. John Hamlon of Fergus Falls, Minnesota
-$1,000 winner:  Toasty Coconut Orange Cake, from Mrs. W. C. Turley, Jr., of Morgantown, W. VA
-$1,000 winner:  $1,000 Hamwiches, from Mrs. Lillian Leonard of Guthrie Center, Iowa
-$1,000 winner:  $1,000 Caramel Candy Pie from Mrs. Florence E. Ries of Sleepy Eye, MN
-$3,000 Junior Winner: Banana Split Pie, from Miss Janet Winquest of Holdredge of Nebraska
-$2,000 Junior Winner:  By Cracky Bars, from Miss Yvonne M. Whyte of New Bedford, MA
-$1,000 Junior Winner:  Salmon-Cheese Pie, from Miss Lynn Fernald of St.Cloud, Minnesota
(And just so you know, my friend Jo’s recipe is Pineapple Brownies!)
To read more about the Pillsbury Bake-Off go to http://www.bakeoff.com/
To find the recipe for the Grand Prize-Winning “Snappy Turtle Cookies” go to http://su.pr/2ksNq8
To read my blogs about the previous Bake-Off contests:
Bake-Off #1: http://su.pr/7gmylO

Old coupon I found in the Bake-Off book.  I didn’t even know people used cents off coupons in the ’50’s!

It’s Time for Farmer’s Markets!
It’s the Law in Chicago..