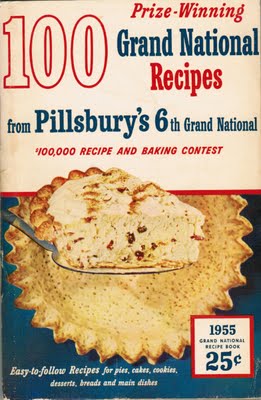 In the 1930’s, the major oil used by Americans was sesame oil.  At that time, the United States was importing 58 million pounds of sesame seeds a year, mostly for oil.  Two events changed the use of sesame oil-  World War II, along with the development of inexpensive soybean and cottonseed oil caused importing the seeds to a low of 12 million pounds.  However, one woman single handedly changed the course of sesame seeds forever, Mrs. Bernard A. (Dorothy) Koteen of Washington, D.C., when she became the Grand Prize winner of the Grand National Bake-Off # 6 for her “Open Sesame Pie.”  After the winning pie was announced, there was a run on sesame seeds all over the country, not just with people wanting to try the pie, but commercial bakers, seeing the instant popularity, wanted to use the seeds for breads, crackers, and other pastries. 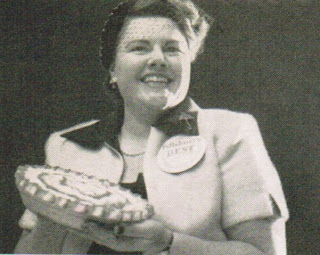 Dorothy Koteen holding her winning pie
When most people hear the words “Open Sesame,” the first thing that comes to mind is the tale of “Ali Baba and the Forty Thieves,” with Ali Baba using the magic words “Open Sesame!” to open the cave.  The origin of “open sesame” reflects the distinguishing feature of the sesame seed pod, which bursts open on its own when it reaches maturity.  Sesame seeds have been known to man as early as 1600 B.C.  Evidence of sesame cakes, wine, and brandy have been found in archaeological digs in Turkey and ancient Iran.  These facts bring me to an opinion of how Dorothy came to name her pie “Open Sesame.”  I read that Dorothy received a doctorate in archeology, and in my mind, she knew all about the spellbinding tales of the Arabian nights, and the tales of intrigue and adventure surrounding the words “open sesame.”  I think her academic mind coupled with her love of cooking gave her the idea of using sesame seeds in the crust, and what better name for the pie of an archeologist than “Open Sesame!”  It was genius.  Probably the most genius title of any Bake-Off recipe.  I have no idea if that was how the name developed, but it sounds like fun and adventure in the kitchen to me! 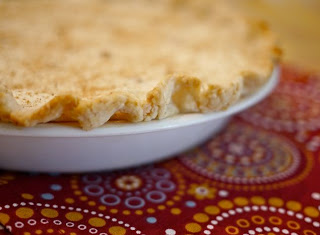 The crust is fabulous.  It is speckled throughout with the sesame seeds and is wonderfully flaky.  I could have eaten just the crust and been happy.  I will certainly use this crust for other pies in the future.  The filling of Dorothy’s winning pie is a creamy and rich date chiffon filling made with unflavored gelatin, eggs, and cream, spooned into the baked pie shell, chilled, then sprinkled with nutmeg on top before serving.  In the Bake-Off book, Pillsbury describes the pie as “exotic,” and a “glamorous and impressive dessert.” 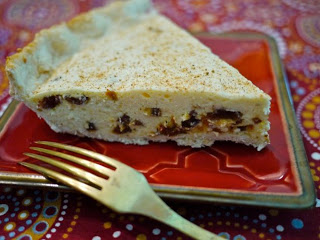 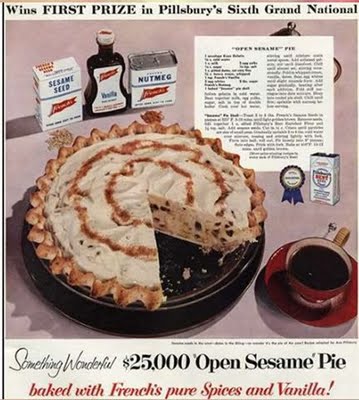 A vintage ad for the winning pie!
Next time you grill a hamburger and place it on a sesame seed bun, thank Dorothy for making that possible!  Amazing what one woman and a love of cooking (and an archaeological mind) can do.  The Bake-Off winners continue to be fascinating.  Lots more stories to come.  Stay tuned.
Here are the other winners of Bake-Off # 6:
-$7,500 winner Butterscotch Chewy Cake, by Mrs. Richard Enloe of Atlanta, Georgia
-$2,500 winner Swedish Ripple Coffee Cake, by Mrs. Kenneth Kennedy of Mahtomedi, Minnesota
-$1,000 winner Butter Cream Orange Cups, by Mrs. J.S. Mitchell of Salt Lake City, Utah
-$1,000 winner Coffee Cloud Sponge Cake, by Mrs. John Matyola of Manville, New Jersey
-$1,000 winner Egg Baskets, by Mrs. James M. Bridges of La Crescenta, California
-$1,000 winner Split Seconds by Mrs. Robert C. Fellows of Silver Spring, Maryland (one of my personal favorites. It’s a Swedish butter cookie with jam down the center)
-$3,000 Junior winner Rosy Apple Whirls by Nancy Harden of Centralia, Kansas
-$2,000 Junior winner Caramel Cream Sandwich Cookies by Helen Beckman of Mt. Vernon, Iowa
-$1,000 Junior winner Teen Bean Bake, by Barbara Maley of Shelby, Ohio (her mother was a prize winner in the very first Bake-Off!)
To read more about the Pillsbury Bake-Off, go to http://www.bakeoff.com/
To see the “revised modern version” of the Open Sesame Pie recipe on the Pillsbury site, go to:
http://su.pr/1At5CV
To read my other Bake-Off blogs from the first five contests:
Bake-Off #1: http://su.pr/7gmylO

First Day of Summer
Wild Berries of the Great Lakes