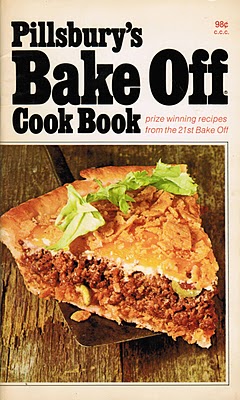 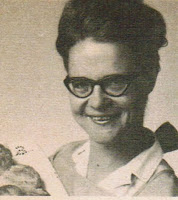 Nan Robb of Huachucha City, Arizona, mother of a 4-year-old son, and wife of a civilian worker at the army post of Fort Huachucha, liked to make a special bread for the family’s Sunday barbecues.  This bread turned out to be special indeed as it won Nan the $25,000 grand prize of the 21st Bake-Off in 1970, and it was Nan’s first time to enter the contest.  Talk about beginner’s luck!  The Bake-Off was held at the luxurious Hotel Del Coronado in San Diego, California. 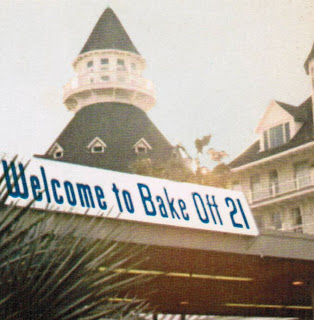 Nan’s winning bread, “Onion Lover’s Twist,” has fresh chopped onion, Parmesan cheese, and sesame seeds in the filling, which is rolled inside each of three strips of bread braided together.  There is no kneading, shaping is easy, and it can be ready to serve warm in only a 2-1/2 hour time period.

I found an amusing photo, which was too blurry to post, of Nan being wheeled in what looked like a little cart, with her sitting on $25,000 in actual cash while holding a check for the amount.  The AP photo was titled “Wheeling in the Dough.” This was a delightful ending to a great Bake-Off.  I was able to get a first-hand account again from our friend of the Bake-Off # 19 post, Gloria Piantek.  Gloria fondly remembers how a photographer had all the contestants gather outside and stand to form the number 21, and then he took an aerial view of the contestants.  Another time for the television cameras, everyone lined up and walked over a bridge while waving to the camera.  When Gloria’s little girl saw her mommy on TV, she ran up and kissed the screen.
This was Gloria’s second Bake-Off, which she entered with her recipe, “German Fudge Wunderbars.”  Gloria took all the ingredients she liked best – chocolate, German cake frosting, and chocolate chip cookies and combined them to make, as Pillsbury describes, “A fudgy bar cookie with popular German appeal.  Rich layered bars are made in one step, then turned out to reveal a chewy chocolate chip base, a creamy cheese chocolate center, and a crisp brown sugar-coconut pecan topping.  So soft and fudgy, you chill them before serving.”  Those decadent-sounding bars actually came about by accident.  Gloria baked her idea, and was horrified that they were too soft to turn out of the pan.  Thinking they were an expensive failure, Gloria decided to just put them in the refrigerator for the time being, as she rushed out the door for a meeting.  Upon return, to her delight, “magic happened.”  Her “failure” after being chilled, turned out to be a fabulous 3-layer fudge bar.  So fabulous in fact, that after the Bake-Off, Better Homes and Gardens magazine featured her recipe as one of their special candies.  So why didn’t it win at the Bake-Off?  Well, through no fault of her own, Gloria’s magic didn’t happen on the Bake-Off floor.  Remember, her bars need to be chilled to have the magic happen.  Gloria made her beautiful bars, and lovingly placed them in the Bake-Off refrigerator.  When she returned two hours later to present them to the judge’s, it seems that a photographer had accidentally pulled out the cord of the refrigerator and no one had noticed.  And there was no time to make and chill the recipe again.  As Gloria says, she may not have won, but it makes a great story for Bake-Off history!
Even though her recipe didn’t win a prize, Gloria found friendships worth their weight in gold. Gloria fondly remembers meeting her soon-to-be friend, Prudence Hilburn, who was in the cookie division.  After the Bake-Off, Prudence went on to work with James Beard in New York City at Peter Kump’s cooking school and also wrote food columns and taught cooking classes.  They are still friends to this day.  Another friend was Marie Dentino from Cicero, Illinois, who won a prize for her “Cheesy Moon Bread,” inspired by Apollo 11, and made with Pillsbury’s Hot Roll Mix.  When the contestants were shopping for their ingredients with a band playing for entertainment, everyone gathered around and clapped for Marie as she did her cheesy moon bread disco!   There was another very special person at this Bake-Off, Edna Buckley from Collins, New York.  Gloria said everyone loved Edna, who went on to compete in seven Bake-Off’s.  According to Gloria, if you put every contestant from the Bake-Off together, you would end up with the enthusiasm of Edna.  And in the end, that’s what the Bake-Off is all about.

The Ancient Elixir
A Piece of American History – and the Best Cornmeal!