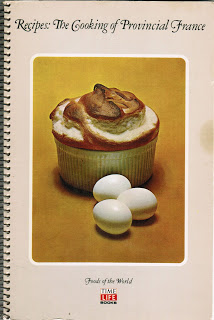 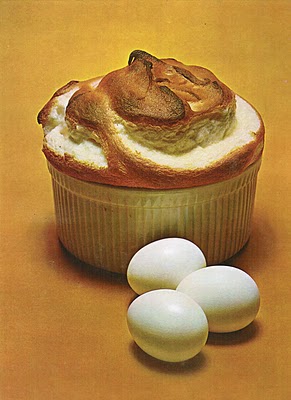 If you are not familiar with the Time-Life series of “Foods of the World,” then you must run to the library and check them all out.  It is a fabulous series of cooking lessons from all over the world.  Each book is filled with information about the featured country with some recipes, but the smaller spiral book contains the bulk of the recipes.  Each country featured in the series always comes with both books.  To continue our journey of French cooking week, today I wanted to feature provincial French cooking rather than the French “grande cuisine.”  The word provincial does not mean “countryfied,” or “bumpkinish,” but rather the cooking that springs from the regional areas called provinces using fresh and local ingredients, and where the catch phrase is “Faites simple” –  Make it simple!
The provinces of France cover more than 30 regions, each one an ethnic pocket of its own culture, history, and way of speech, as dictated by its special geography.  Many people live near where their ancestors lived, sometimes even in the same houses.  They still understand and grow the herbs for the old dishes, and still cook and eat in seasonal patterns.  In the tiny villages, there is at least one general store where farmers will sell their wares.  There may not be as much to offer as a larger city, but whatever there is, it is fresh.  There is also sure to be a special signature bread for each community.  Some breads are flat to fit in a hunter’s bag, or long and thin to stand alongside a bottle of wine in a shepherd’s deep pocket.  The most popular bread in France is probably the baguette.  Croissants and brioche are sacred to breakfast and lovingly served with coffee or hot chocolate. 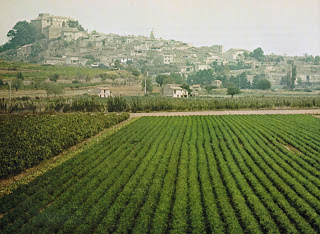 A field of carrots soaking up the heat of a Provencal afternoon.
Even for Parisians, the authentic France is still to be found in the countryside.  There the days are calmer, the pleasures simpler, the food straightforward and full of flavor from the gardens and farms.  After buying local ingredients, or picking from a home garden, the preparation of the food is a joy in itself.  In provincial cooking especially, the French technique is to let the ingredients speak for themselves. For soup-making, it is said that a good soup must taste of the things it is made of, and is usually served at the supper meal, along with a light egg dish, and a simple dessert like fruit or custard.  Since soup is meant to be eaten at the end of a day, it should not be heavy or hard to digest.  Families will have the last of the fresh daily bread with soup and then retire for the night.  For meat dishes, a large piece of meat as Americans are accustomed to eating, is seldom served.  A meat dish in France is more likely to be lamb, veal, or pork, roasted simply to bring out its best flavor, and helped along with the additions of garlic and herbs.  A favorite stew is cassoulet, with its fundamental ingredients of beans and meat.  It is a sturdy dish, meant to warm and fill the belly, and to be enjoyed without any other rich accompaniments.  Among the best French cooks it is practically considered a  sin to open the oven or create any kind of draft until the crumbs on top of the cassoulet are golden brown.  There is a story about the owner of a little cobbler’s shop, on days that he would be preparing cassoulet, would hang a sign on his door, “Closed against currents of air – cassoulet in the oven.  Please return tomorrow.” 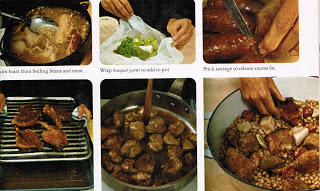 Preparing cassoulet, step-by-step.
There is so much more to read in this wonderful series, about vegetables, eggs, desserts, salads, hors d’ oeuvre, fish, poultry, cheese, fruit, and wine – more than I could ever cover in a blog.  If you find these series of books in your library, or find them at book sales (as I did!) have a wonderful time in the kitchen.  And remember, “faites simple!” 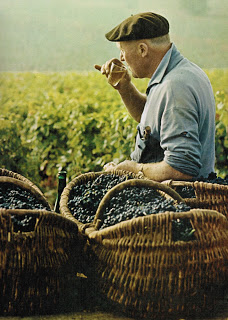 Here is a man who loves his work!  A Burgundian grape picker washes down his sandwich with wine from a bottle he has brought into the vineyard.  These grapes will make Vosne-Romanee, a wine of the Cote de Nuits, south of Dijon.