An Abundance of Summer Peppers for Southwest Cooking 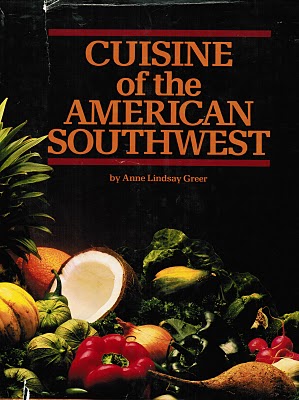 Peppers of all kinds are popping up like crazy in my garden.  I always like to do more than just saute them for fajitas or put them in kabobs.  This is the cookbook I always turn to for ideas.  Published in 1983, this cookbook from Texan Anne Lindsay Greer offers more than 300 recipes from her regional cuisine.  Southwest food is earthy and festive with its cuisine redolent of the warmth of it sun and soil.  Anne takes the cuisine of the Southwest to a sophisticated level with a passion for quality ingredients.

Contrary to popular opinion, Southwest food is not all hot.  The amount and kind of chile and whether it is fresh, dried, or ground determines its hotness level.  The recipes in this book are probably considered more mild and delicate than how many think of Southwest food.  Anne offers old and traditional favorites, along with new inspirations or variations on classics.  For example, there is a great recipe for red chile pasta.  The dough contains chile powder and cumin, while the sauce for the cooked fresh pasta includes cilantro and sour cream.  The Santa Fe Enchiladas have Monterey Jack in the filling, but also ricotta.  Quesadilla fillings consist of ham and swiss, or shrimp and cream cheese.  The most splattered page of this book is the recipe for Jalapeno Jelly.  I love making this jelly, as much as my family and friends love receiving it for gifts.  I make both the red and green jelly for Christmas because it looks so festive glistening in the jars.  A quick, easy and well-received appetizer I always make is just to place 2 packages side-by-side of block cream cheese, and spoon the red jelly on one, and the green jelly on another, and serve with crackers.  It’s always an instant hit.

I could never make the perfect sopaipilla until I found this book.  When I lived in Oklahoma City, there was a restaurant that served the biggest, fluffiest sopaipillas I have ever seen.  They are traditionally served with honey as a dinner roll, sort of the Southwest version of a roll and butter.  Sopaipilla dough is similar to that for flour tortillas, but it is rolled and folded to ensure even puffing when fried.  The most important technique I learned from the book is to spoon the hot oil over the pastry while frying.  Sopaipilla means “pillow.”  No wonder I dream about these heavenly puffs of dough.

2 Responses to An Abundance of Summer Peppers for Southwest Cooking