I am a potato salad fanatic, always in search of the next greatest potato salad. Turns out this simple Nordic-style version with dill and sour cream is my favorite.  Well… at least so far.  I have been known to change my mind, but this one seems to have lasted the longest as my favorite, and perfect for the 4th of July weekend.  It’s lasted so long as my potato salad of choice, I actually have blogged about it before but that was several years ago and it needs repeating every once in a while in case you missed it.  And you don’t want to miss this potato salad. 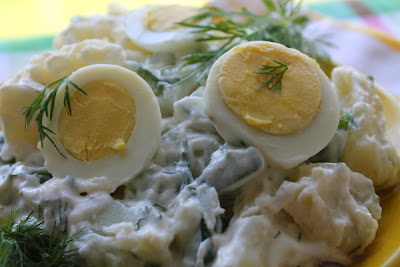 This potato salad has a dressing of sour cream, mayonnaise, fresh dill, cucumber, red onion, salt and pepper. That’s it.  So easy.  It’s folded into still warm waxy-type potatoes and immediately chilled.  Top it will hard-boiled eggs and more dill.  It’s great with 4th of July fare like hot dogs, brats, burgers, chicken, steaks, or just about anything.  I like it best with hot grilled spicy sausages or brats.

Have a safe and happy 4th of July weekend!!

2 Responses to My Favorite Potato Salad