Someone’s in the Kitchen with Dinah

No, I am not about to break out in song.  This is actually the title of Dinah Shore’s delightful cookbook, “Someone’s in the Kitchen with Dinah,” published in 1971.  Some of us may remember her Chevy commercials (See the USA in your Chevrolet!) or some may recall her love affair with Burt Reynolds, who was 20 years her junior.   I remember both, but enjoy her cooking more.  The first line in her cookbook is “I have been collecting and trying recipes ever since I can remember,” a statement that will capture my attention right away.  It means the book probably offers lots of old family recipes, which it does, but since she lived in LaLa land with lots of celebrities, we will be able to see what’s in their kitchens, too.

Dinah Shore was born Frances Shore, but after a singing audition at one point in her career, she sang a song called “Dinah,” and she became known as “that Dinah girl,” so the name stuck.  Dinah became a very successful singer, television host, recipient of nine Emmys, a Peabody, and a Golden Globe.  At the end of her television shows, she was famously known to throw an enthusiastic kiss directly to the cameras and the viewing audience and exclaim “MWAH!” to the audience to thank them for being with her.  It was always said by Frank Sinatra that “Dinah blows the best kisses!”

Speaking of ol’ Blue Eyes, Dinah’s most requested recipe from her shows was Frank Sinatra’s spaghetti sauce, which you will find in the cookbook.  Other celebrity recipes include William Holden’s Marinated Hawaiian Steak, Jack Benny’s Roast Chicken, Godfrey Cambridge’s Spaghetti Alla Carbonara, and Fanny Brice’s (the real “Funny Girl!”) Super Chocolate Cake.  Wouldn’t you have just loved to have been at guest at Dinah’s dinner parties?!  Dinah was famous for her parties, which she always wanted to be casual.   The only formal gesture she made was to have name cards for each guest, even if the meal was served buffet-style.  She liked to seat the shyer ones with the livelier extroverts.  Dinah explains: “You don’t have to always seat people in the same old traditional way- boy, girl, boy, girl, etc.  I happen to have a long dining table, not a round one, so I have on occasion seated ladies on one side – gents on the other. That way they can look at each other and chat more easily.  Most women I know would rather look at a man any time.” 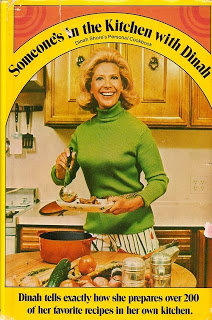 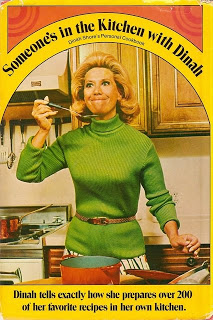 The recipes in the cookbook are all tried and true favorites.   There are many recipes from her upbringing in Tennessee, including Cousin Selma’s Pancakes, Mother’s Chili Con Carne, Mother’s Chicken Salad, and Mother’s Pecan Rum Cakes.  In the true spirit of her country roots, Dinah once threw a party where she told guests to dress in overalls and straw hats.  The buffet table included the addition of “blue ribbons” on the dishes in county fair style.  She had red-checkered tablecloths, watermelons, magnolia branches as centerpieces, candles in tin cups, jugs, fried chicken, biscuits, and mashed potatoes, all enjoyed with country music in the background.

Dinah Shore died of ovarian cancer five days before her 78th birthday, in 1994.  In her birthplace of Winchester, Tennessee, there is a Dinah Shore Boulevard.  In my basement of cookbooks, I look at Dinah’s smiling face on the cover of her lovely cookbook and can only say thank you, with a great big “MWAH!”

Dinah Shore, Someone's In The Kitchen With Dinah

Mrs. B and Craig Claiborne’s Herb And Spice Cookbook
The Gentle Art of Chinese Cooking

4 Responses to Someone’s in the Kitchen with Dinah