Mrs. B and Craig Claiborne’s Herb And Spice Cookbook

In the previous entry about Bert Greene and his “Kitchen Bouquets,” I mentioned how I loved his chapter titles with names of spices, herbs, and other food items.  Craig Claiborne does the same with his cookbook, “An Herb And Spice Cookbook,” published in 1963.  I found this enticing book at an estate sale for 25 cents.  I’m sure Mr. Claiborne would not like the fact that one of his masterpieces sold for such a pittance, but he would be happy to know that the book was very well-loved and used, as it has many kitchen-splattered pages and a worn out cover.  The former owner, Mrs. B, carefully wrote her name and the date she bought the book on an inside page and it could be returned to her if ever misplaced.  Since this particular sale was an estate sale, I can assume that Mrs. B had died, so it was not her choice to rid of the book.  In fact, she had dozens of cookbooks that I purchased along with this one, in addition to many gadgets and dishes.  The executor of her estate obviously did not know the value of the treasures Mrs. B left behind!

The chapters in this book are arranged by 54 herbs and spices, starting with allspice and ending with woodruff.  What? Apparently, woodruff grows wild in many European countries where it is used as a flavoring for candies, wines, and punches, or “bowles.”  I doubt I will find woodruff easily here, but the remaining 53 are all recognizable.  I have no doubt Mr. Claiborne was familiar with every one of the herbs and spices, considering his impressive culinary resume.  His beginnings were in his mother’s boarding house in Mississippi.  After leaving home, he served in the Navy where he obtained a GI Bill scholarship, which he used to attend Ecole Hoteliere in Switzerland.  From there he moved his way up the food publishing business first as a contributor to Gourmet magazine, and then onto food editor of the New York Times, which is how many remember him.  Claiborne is said to be responsible for introducing Americans to a diversity of cuisines and innovative chefs.  He was also the brainstorm of the now-famous “Four Star” rating system of restaurants. 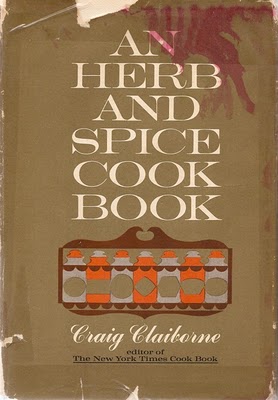 In my copy of the book, the most spattered page from Mrs. B is for a “Bacon-and-Onion Bread,” which sounds so wonderful you can almost smell it through the paper.  When I first brought the book home many years ago, I started searching for recipes under some of my favorite herbs and spices.  The first chapter I turned to was cardamom, where I found a very simple, but buttery, yummy cardamom cookie.  I still make the “Chive Mayonnaise” whenever my chives finally pop up through the chilly spring garden soil.  The cinnamon chapter offers “Maria Von Trapp’s Linzertorte” with a crust of orange peel, cinnamon, and cloves embracing the filling of plum preserves.  My sage plant begs me to make the “Southern Cornbread Stuffing” laden with butter and bacon. With all these heavy dishes, it is not surprising to note that in later years, Mr. Claiborne authored cookbooks dedicated to healthy, low-sodium, and low-cholesterol diets!

Craig Claiborne died in January of 2000, leaving behind many grateful food-lovers with dozens of creative, appealing cookbooks to savor for many years to come.  In his will, he bequeathed his estate to The Culinary Institute of America in Hyde Park, New York, which produces some of our greatest chefs.  I need to thank Mrs. B for leaving behind this cookbook for lucky me to find at her estate sale.  It’s in good hands, Mrs. B.  I love it as much as you did.