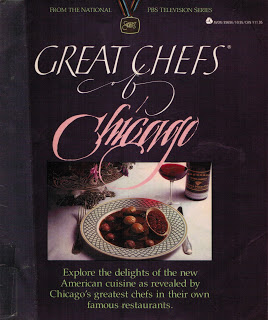 In last Wednesday’s Chicago Tribune, there was a wonderful article about one of Chicago’s (and the world’s) greatest chefs – Grant Achatz of Alinea restaurant.  He graduated from the Culinary Institute of America in Hyde Park, New York, worked for another great chef of the world, Thomas Keller of The French Laundry in the Napa Valley, and has now earned 3 Michelin stars for Alinea.  Chef Achatz has a book due for release on March 3rd called “Life on the Line,” which I cannot wait to read, and watch for a review here in the future.  It’s even being adapted into a feature film, possibly starring Leonardo Di Caprio, or Robert Downey, Jr., although I think Ethan Hawke looks more like him!  We here in Chicago are so happy to have Alinea and Chef Achatz in our great city.

Reading the article stirred my memory of this book in my library about other great chefs in Chicago.  This book from 1985  is based on the PBS series about great chefs around the country, including  the other cities of  New Orleans and  San Francisco.  The program was an instructional cooking class that allowed viewers to work through the preparation and steps of a dish.  There was a wealth of knowledge to be learned from the shows, not just about cooking skills, but it brought to life the personalities of the chefs.  It also showcased each chef and his restaurant, including Jean Banchet of Les Francais, Pierre Pollin of Le Titi De Paris ( I took cooking classes there from Pierre!), Michael Foley of Printer’s Row, Thierry Lefeuvre of Froggy’s, and Carolyn Buster of The Cottage, to name a few.  Not all of the places and chefs in the program are still around, but it’s a wonderful cookbook to read and try some amazing recipes.  One of these days I hope to dine at Alinea, but it may be awhile before reservations are even possible.  In the meantime, I’ll have to make the famous raspberry cake from The Cottage.  I can handle that!

Cookbook Giveaway for the Week of 2-21-11
Ready-Made Dough Could Win You $1 Million!