A Joyous Meeting of North and South

Following my daughter Kara’s marriage this past Spring to the love of her life,  the family decided to have a few family parties across the country to celebrate this joyous union.  On the 4th of July, one celebration brought us all to Mississippi, the home state of Kara’s new husband.  To say we Northerners encountered Southern hospitality is an understatement! 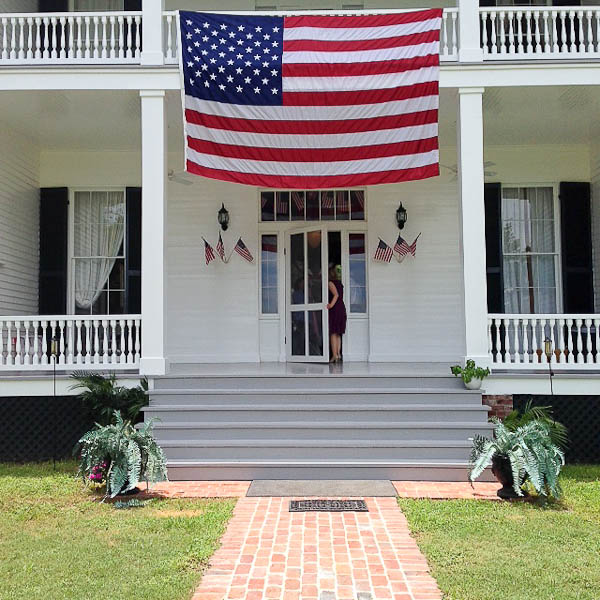 The groom’s family home is right out of Southern Living magazine.  It was built in 1840, stands a majestic three stories with massive verandas, and is surrounded by huge, glorious trees.  It is breath-taking to say the least.  The myrtle tree that reaches to the rooftop has been documented as the largest of its kind in the state of Mississippi. 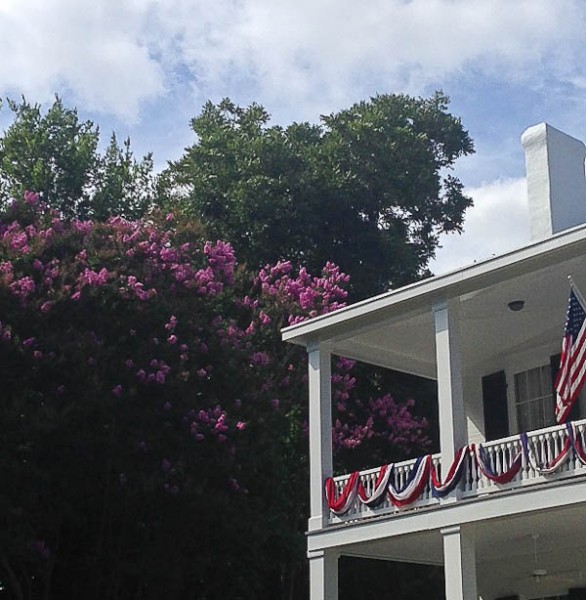 When we first entered the home through the enormous door, it took my breath away.  Straight ahead was a very long table just waiting for some good Southern cooking.  Beautiful cabinets couldn’t even reach the 13-foot ceilings. 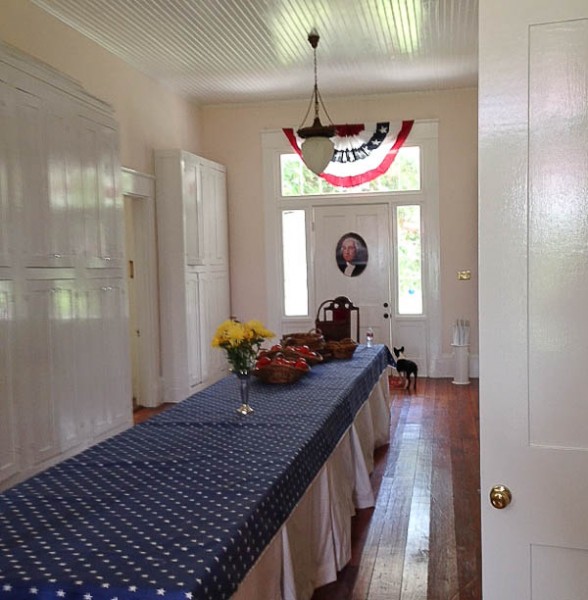 The first of the many rooms I wanted to check out was the kitchen.  It didn’t disappoint! 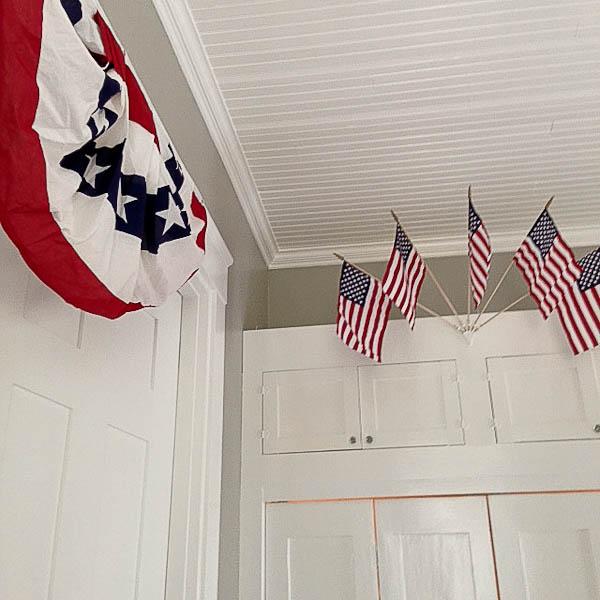 Needless to say, a ladder is needed to reach these shelves, but open the doors and here is the pantry. 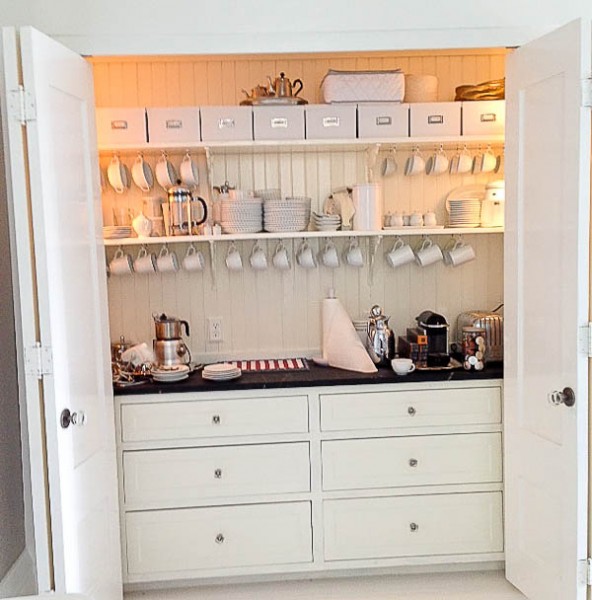 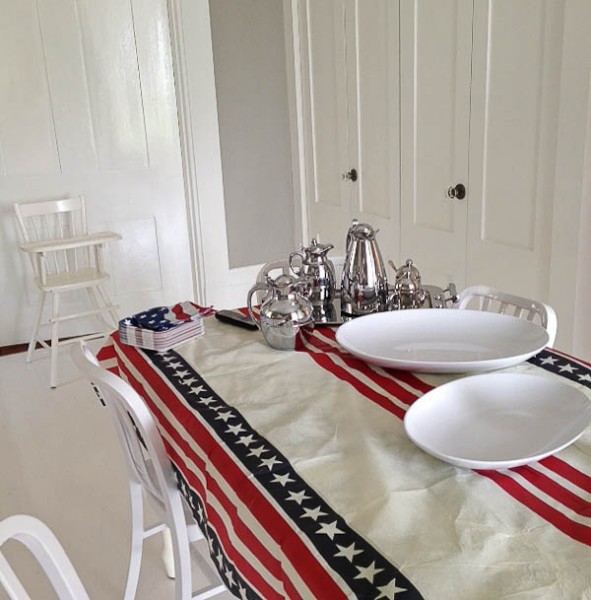 Dishes are ready for the feast! 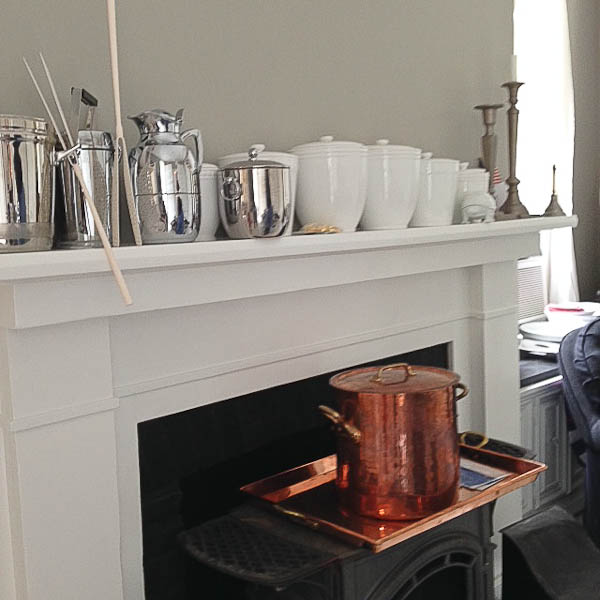 A fireplace and copper pot with copper tray add a cozy feeling to the kitchen. 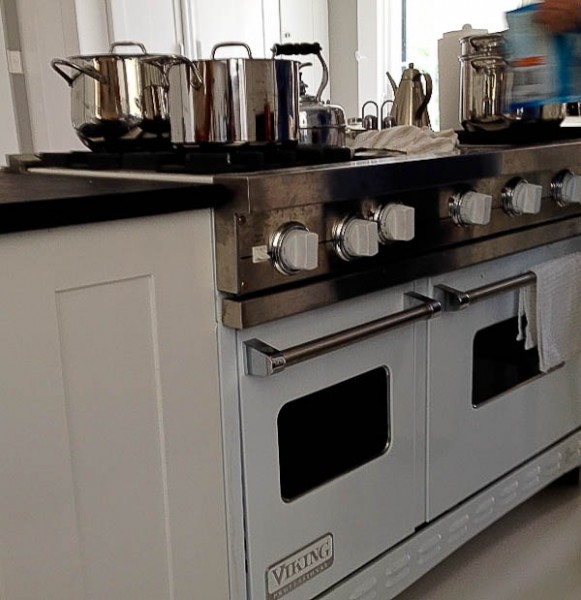 Next to the kitchen is the dining room. 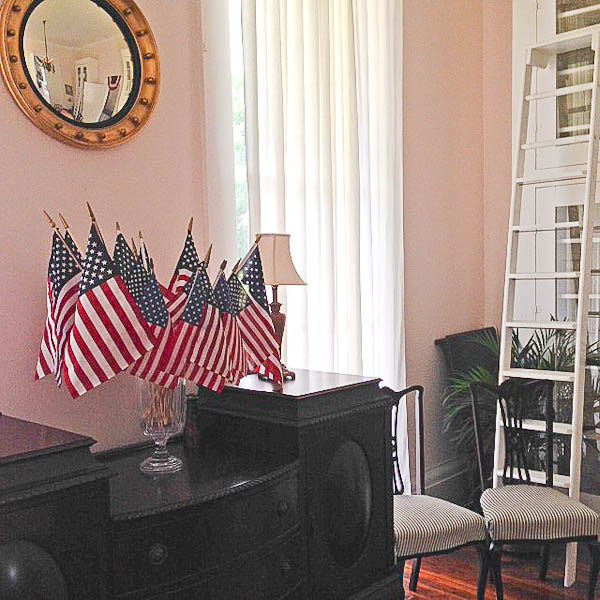 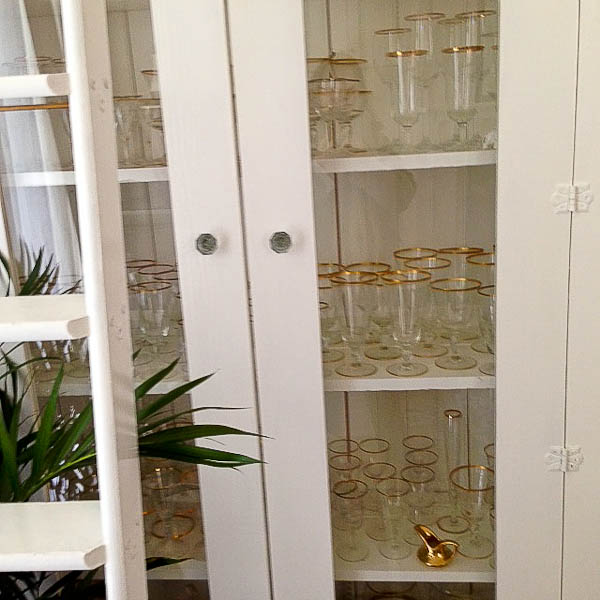 Next I decided to tackle the very long stairway up to the second floor.  It was a long way up… 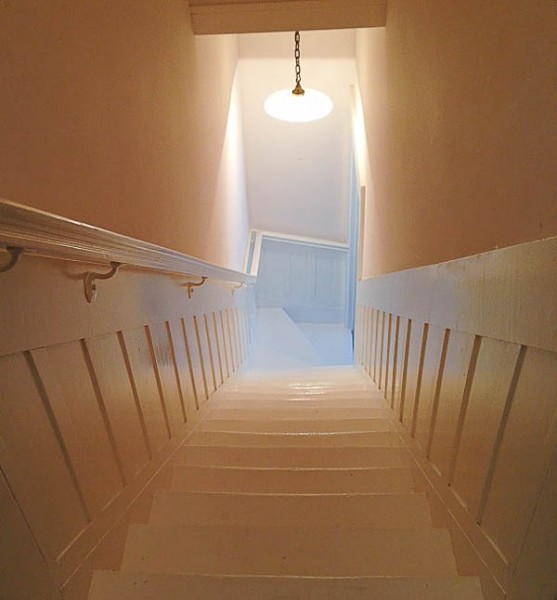 I turned around at the top and took this photo and wondered how I would make it back down those steep stairs.  I needed a rest after that climb and found the library. 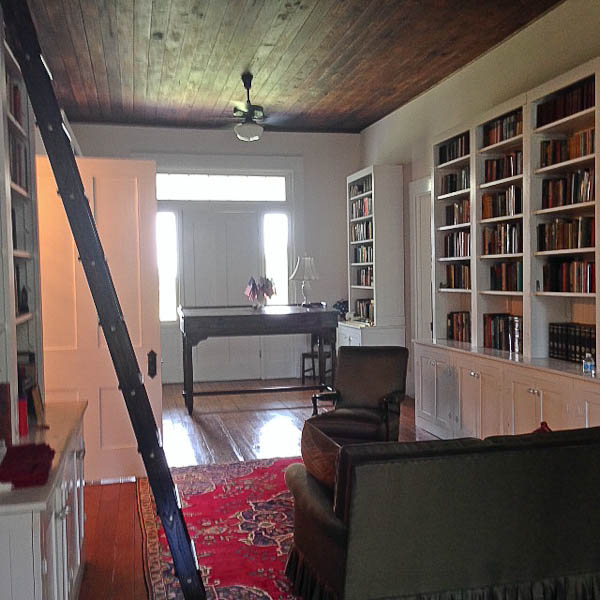 I can get lost in libraries and any room filled with books for hours and this one was no exception.   I could have happily stayed here all afternoon, but the aroma of something wonderful was climbing up those long stairs.  I didn’t make it up to the third floor, with its even steeper stairway.  The third floor was used as a hospital for wounded soldiers in the Civil War, and now serves as a playroom for the grandchildren.

I stepped out onto the veranda and admired the beautiful view from above. 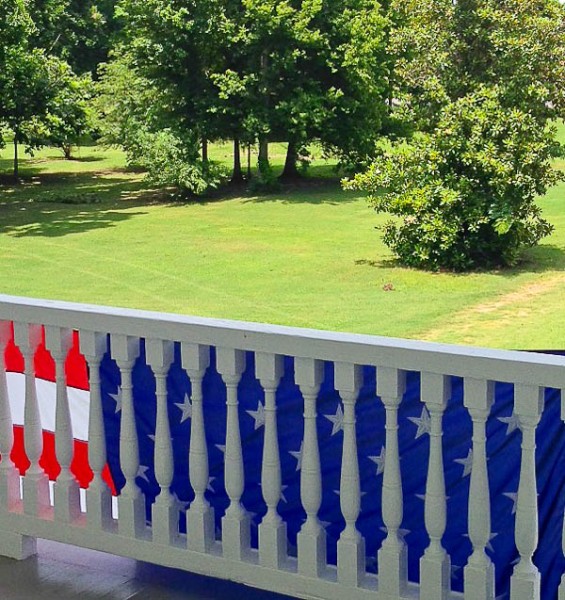 Before heading downstairs, I noticed a special sign on one of the doors.  I think I know whose room that was! 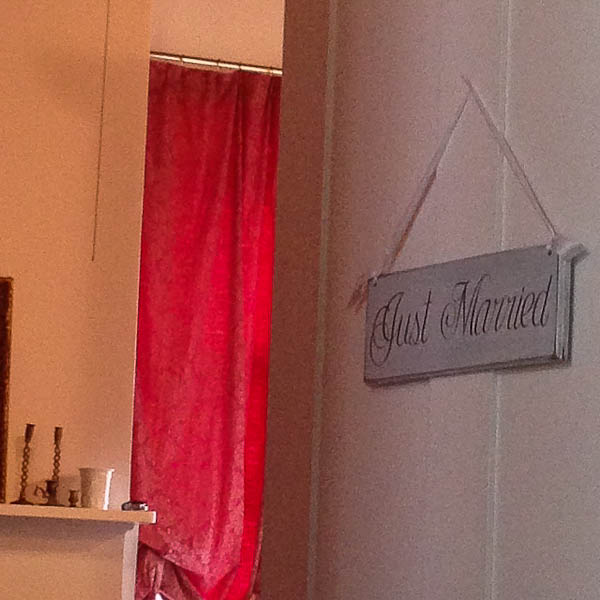 When I made it back downstairs, the once empty table was now overflowing with food and everyone started coming inside after playing a variety of games outside including the famous family tradition of a croquet tournament. 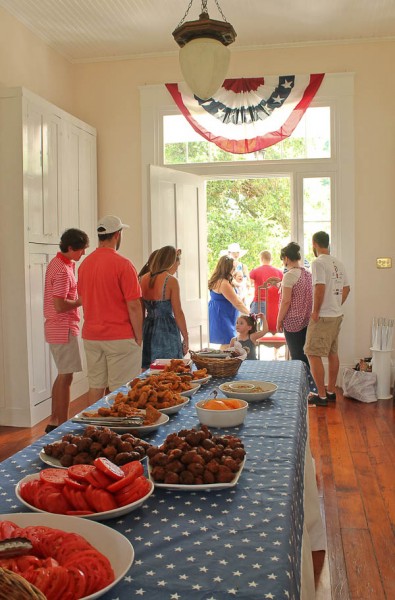 Uncle Ken made his famous fried catfish and hush puppies.  I have to declare them the best I have ever eaten.  It was a feast fit for kings! 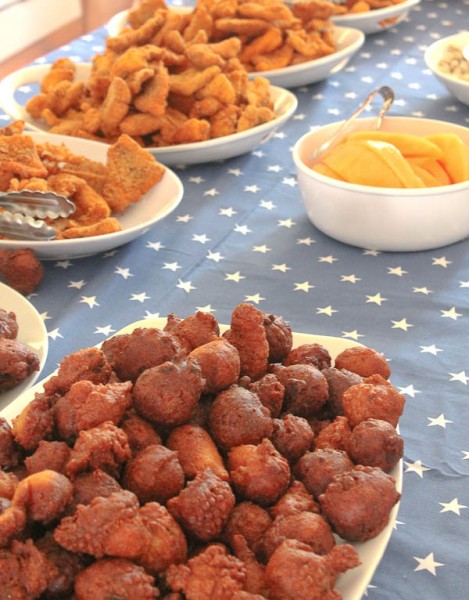 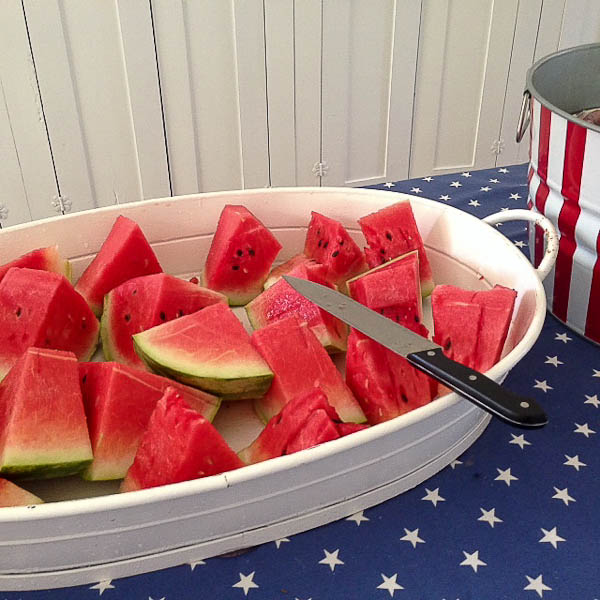 After everyone had their fill, we all headed out to the yard to enjoy the Dixie band that was setting up on the lower level veranda.  We enjoyed the music as the children and their dogs ran around the property, all of us awaiting the fireworks. 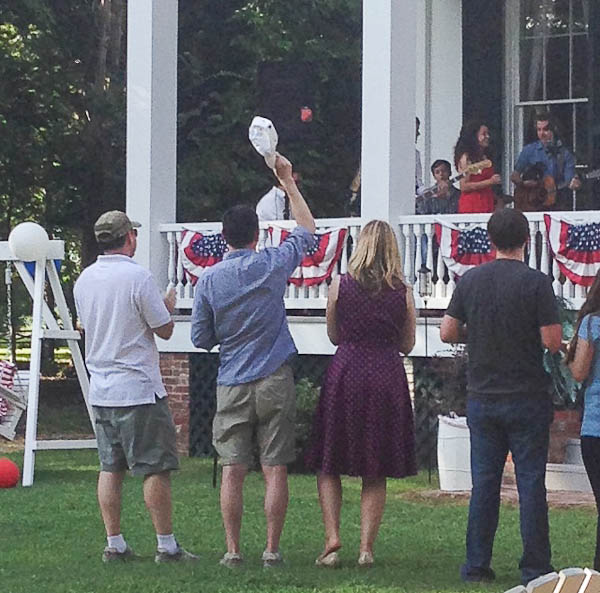 As dusk fell, we all jumped at the sound of what sounded like a cannon.  Someone in the crowd yelled, “The Yankees are Coming!”  After we all got a chuckle out of that, the fireworks show began, and quite an ending to a day we now call the joining of the North and the South in our family.  We all toasted to the happy couple. 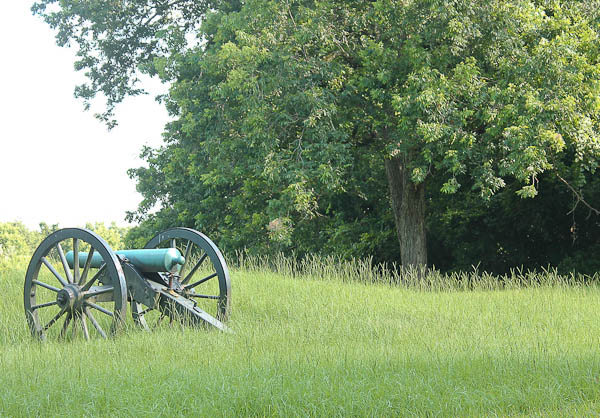 Unfortunately, sadness followed a short while after the party.  Kara’s beloved father-in-law, Bob, affectionately known by all in the family as “Papa,” became very ill with a fast-moving and unexpected cancer.  Papa died recently and was buried last weekend.  We are so grateful to have known Bob and he loved our Kara with all his heart.  He will be missed forever. 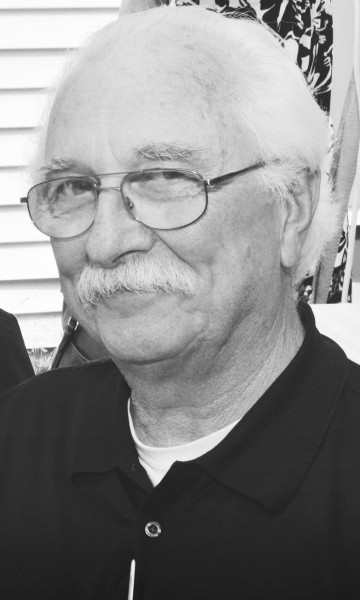 Sphere Magazine: November 1972
Stuff It! Your Turkey, That Is..

One Response to A Joyous Meeting of North and South