My loyal readers probably know by now that it has been my obsession to find every issue of the old Betty Crocker Sphere magazine, from its first issue beginning in 1972 until it became known as Cuisine magazine by the late ’70’s.  Due to several of my wonderful readers who sold me their issues, I now am only missing one issue, August 1972.  Every once in a while I go on a mission to find the magazine and have yet to find it.  I did a search of which libraries in the country had Sphere in their archives, and I discovered that the Milwaukee Public Library has them, and lucky for me, Milwaukee is only about an hour away.  At this point, I would be happy to have a scanned copy of the entire issue. 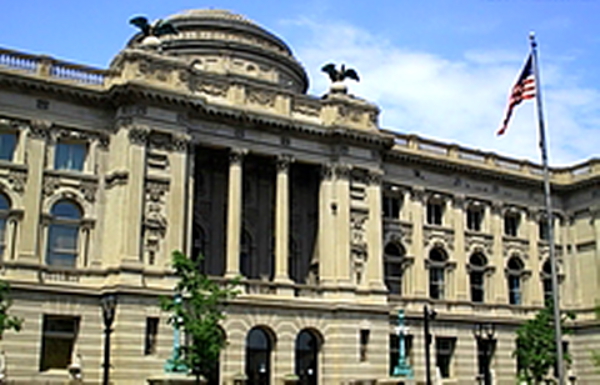 The Milwaukee Public Library built in 1898

I discovered something else on the Milwaukee Library site as I was on my search for the elusive issue.  Librarians (bless them!) at this library clipped recipes from the city’s two largest newspapers, the Milwaukee Sentinel and the Milwaukee Journal, from the 1960’s to the 1980’s and filed them on index cards.  Now a selection of those recipes, over 500 and counting, are available on their new Historic Recipe File digital collection after going through drawers and drawers of recipes and other food articles.  They decided that the recipes were actually historic as many of the recipes are from Milwaukee restaurants no longer in existence.  It was also believed that cooking and food enthusiasts would enjoy culinary snapshots of earlier eras with ethnic specialties from German, Polish, and Slovenian cuisine, right beside the 1960’s casseroles made with cream of mushroom soup.  The collection provides a fascinating glimpse into the local and ethnic foods that were popular in Milwaukee over fifty years ago.  This digital collection is a work in progress with the goal being to add thousands more of the recipes over time.

The librarians timed the release of the recipe collection to coincide with the start of “National Culinary Arts Month.”  Each day this month, the home page will showcase a different recipe.  You will find the yellowed clippings listed alphabetically by name but can also be searched by ethnic origin, cooking or baking, and various categories such as appetizers, breads, desserts, etc.  In selecting the first group, the focus was largely ethnic dishes and local specialties such as Latvian roast goose, kufta, sauerbraten, “wildburgers” using moose, deer, buffalo, or caribou; kranskis (sausages), potica (Slovenian filled pastry), and the ever popular paczki, which are Polish doughnuts (pronounced “poonch-key”).  You can print recipes right from the collection and add them to your recipe box.  I have already printed out Zavinaki,  Zwiebelkuchen, and Zwetschgen kuchen, but  I think I will need another box –  just for the titles…  Have fun.  I think you will enjoy this.

Bless our librarians and our libraries!  What would we do without them?