Just as I await the announcements of the James Beard and Michelin Awards each year, my husband Bill awaits the Super Bowl competitors.  Now that we know the Seattle Seahawks and the New England Patriots will be playing a week from Sunday, it’s time to start thinking about the food; at least that’s what Bill does.  People go crazy for Super Bowl food and drink, and of course it’s always a good excuse to have a loud party.

Like many football fans, Bill likes hearty fare, so I thought I would start with a stick-to-the-ribs chowder, which I suppose seems more New England even though Bill is hoping for a Seattle win.  I have been making this corn, sausage, and potato chowder for years.  It was even selected as a feature in Midwest Living magazine sometime back in the ’80’s about Midwest soups, and is also one of my mom’s favorites.  Hope you like it, too! 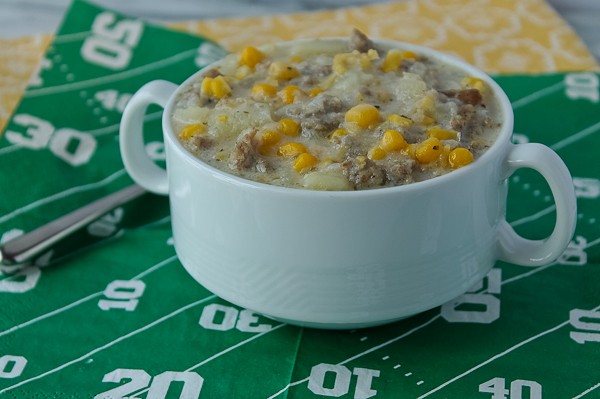 Print
Corn, Sausage, and Potato Chowder
A good and hearty chowder to enjoy while watching the Super Bowl!
Ingredients
Instructions
3.2.2885