Looking for Tyler Florence and finding the Grateful Dead

The last few times I have been in California visiting family, I always meant to go back to Tyler Florence’s kitchen store in Mill Valley.  It just never happened.  My daughter Kristina and I were there well over a year ago.  We loved the store, especially the cookbook area.  It was like a mini library and very cozy.  I took this photo of Kristina while she was reading some new cookbooks. 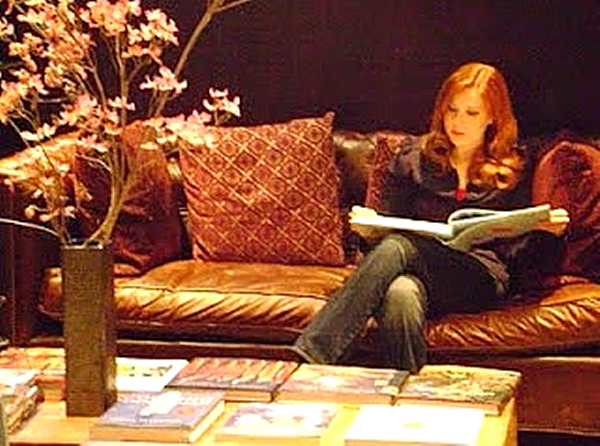 On our most recent trip, Kristina and I were determined to make it to Tyler’s store once again.  We had a rental car and some spare time before the big wedding celebration party for my youngest,  Kara, and her new husband, so off we went for what we thought would be an afternoon of fun.  We got to Mill Valley and hit construction traffic.  Not that it’s anything much, but Mill Valley is small, so it just seems bigger and more annoying. 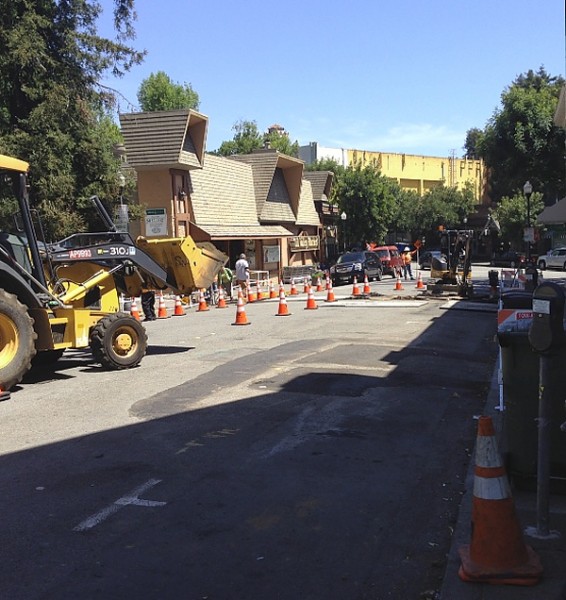 We found a parking space near Tyler’s place and headed up the street.  We saw the outside of the store, but as we approached, our hearts sunk as it looked like the windows were papered over.  Where were the gleaming copper pans?  The piles of cookbooks?  Noooo… he couldn’t have closed! 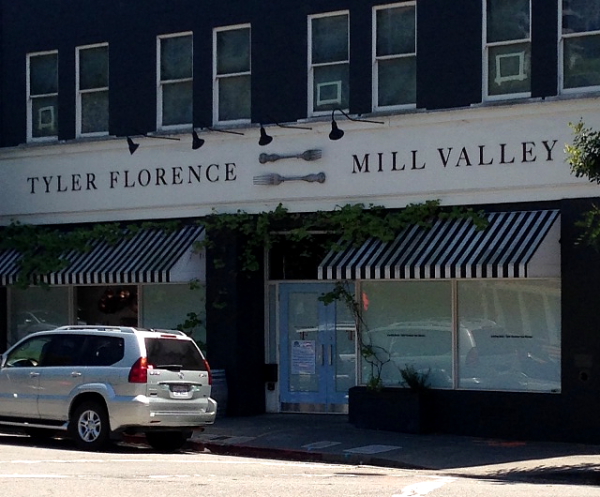 See that little tiny writing on the windows?  Here’s what it said:

Okay, at least it’s not closed, and you can follow the progress on the store’s facebook page.  And we will definitely check it out when the test kitchen is ready.  It’s pretty exciting, actually, and now we can’t wait to see it on our next visit.  Mill Valley is a darling little town, so there are still things to do and see.  We had to check out our favorite market in town, Mill Valley Market of course, that has been there, I think, since the 1920’s.  It’s very gourmet, as you can imagine, and filled with all kinds of goodies. 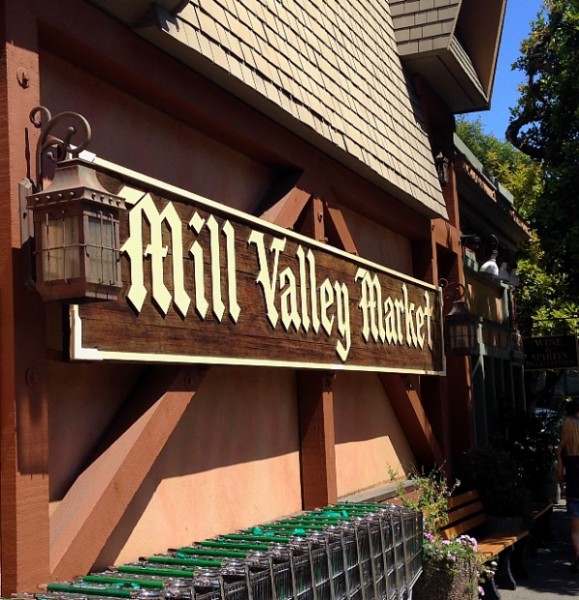 We decided to grab some lunch, but the construction was blocking everything and making it hard to get around.  As we were walking down the street trying to decide what to do, we decided to do what we always do when we don’t know where to eat – ask a total stranger on the street!  We approached a very nice woman who was so helpful and we chatted quite a while.  In the end, she told us to check out Sweetwater.  We would have anyway, had we found it, because we liked the name. 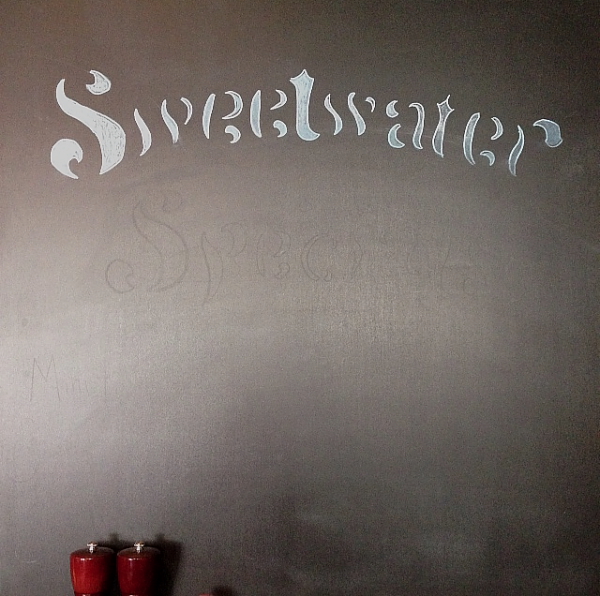 We walked in and found a table for two right away.  It was very small with an outdoor area for seating, but it was full at that time. We loved our view out the door. 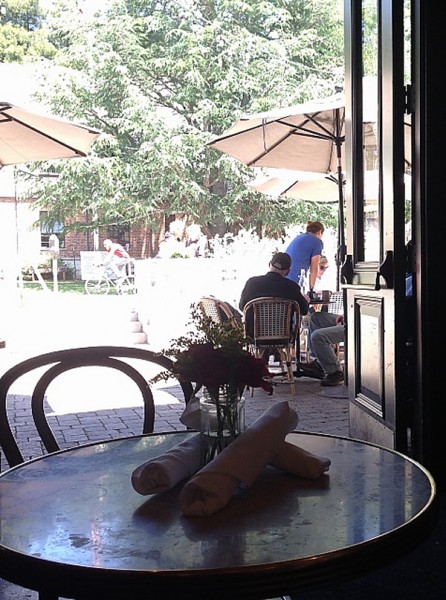 Our server came over, a happy and chatty high schooler.  He handed us a menu then brought some water served in mason jars. 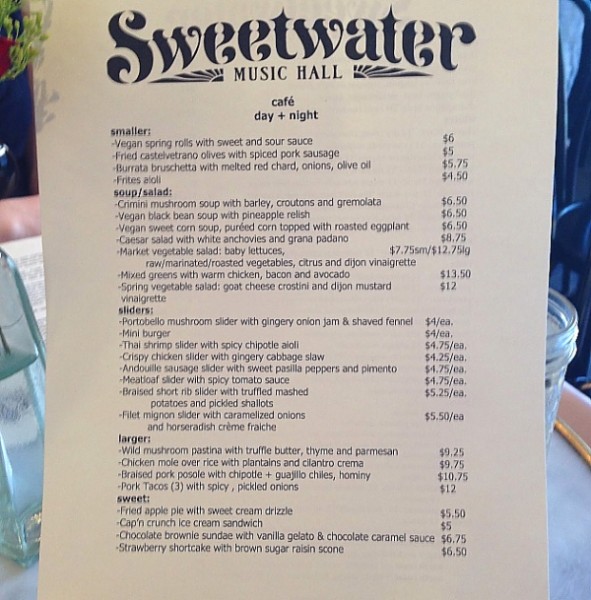 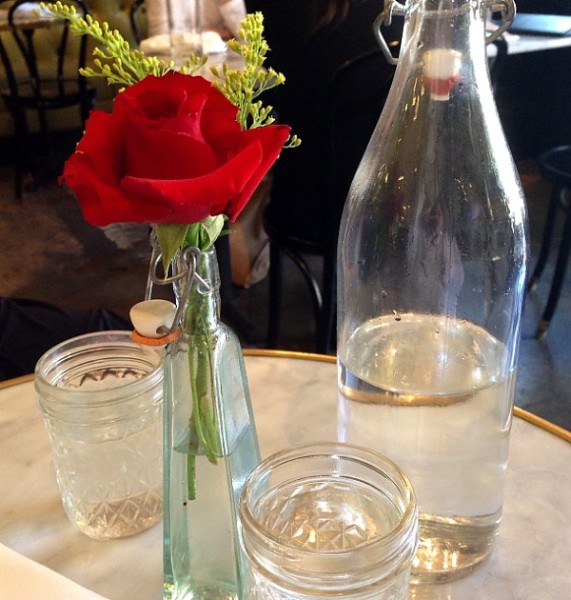 We asked our server why it was called a music hall.  Turns out, the twenty-seven owners are mostly musicians, one even a member of the Grateful Dead.  There are posters all over the walls and even cover all the stalls in the restroom. 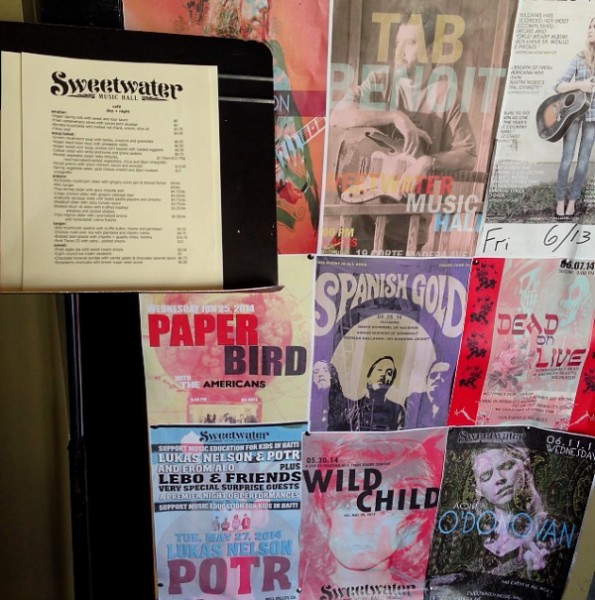 Not only that, our server pointed out that the music hall was attached to the restaurant where the locals can play, and if one is lucky, the Grateful Dead, or at least one of them, will show up sometimes and sing. 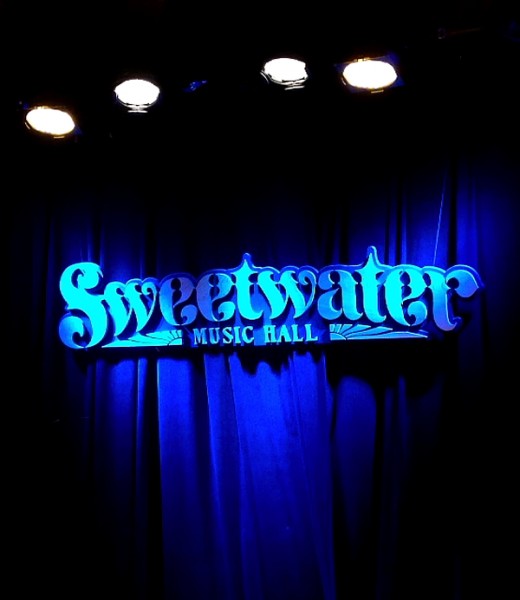 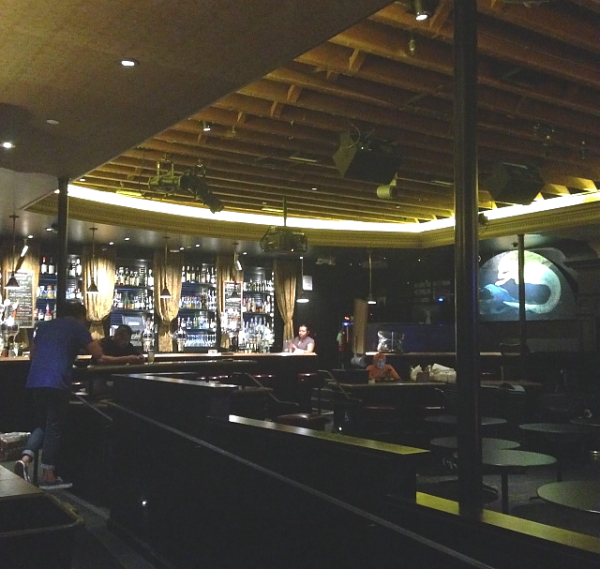 We finally turned our attention to the menu.  Sweetwater has three menus, breakfast, brunch, and day + night.  We were handed the day + night menu which had appetizers, soups and salads, a huge variety of sliders, some larger portion meals, and sweets.  As we sat there, the servers walked by mostly with huge plates of sliders.  We decided they must be the most popular item.  We decided to try a variety of things and started with the fried castelvetrano olives filled with spiced pork sausage, and a couple pieces of the burrata bruschetta with melted red chard, onions, and drizzled with olive oil. 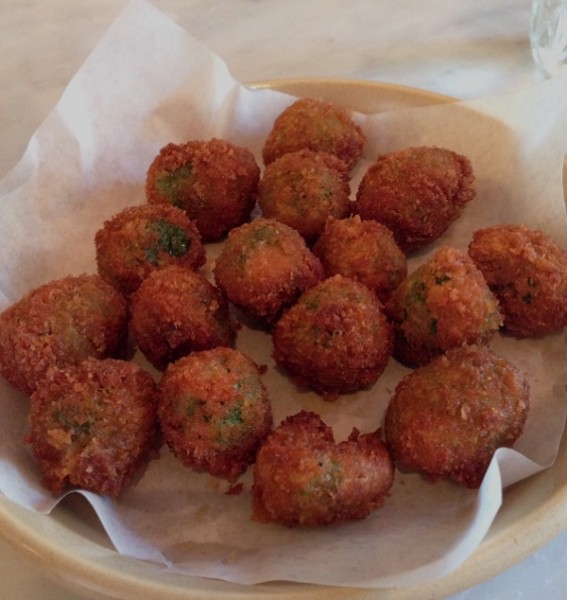 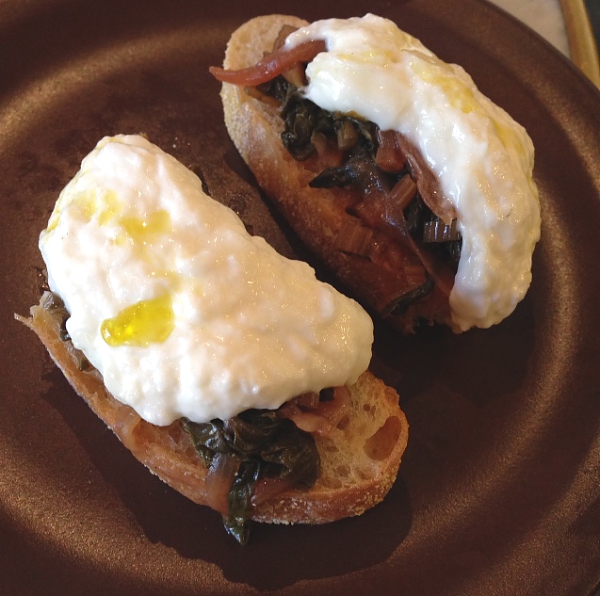 Since the sliders seemed to be so popular, I selected the portobello mushroom slider with gingery onion jam and shaved fennel, while Kristina selected the filet mignon slider with caramelized onions and horseradish creme fraiche.  Both were amazing. 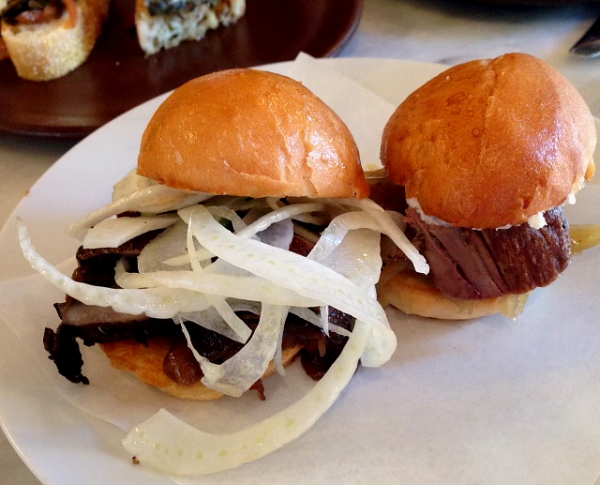 We really didn’t feel like a dessert, but Kristina had recently been hired by a cereal company to come up with recipes, and on the menu was a Cap’n Crunch ice cream sandwich that she wanted to check it out.  It was a cookie base with the cereal baked in, filled with vanilla ice cream, and placed on a plate with more Cap’n Crunch.  It was good, but messy! 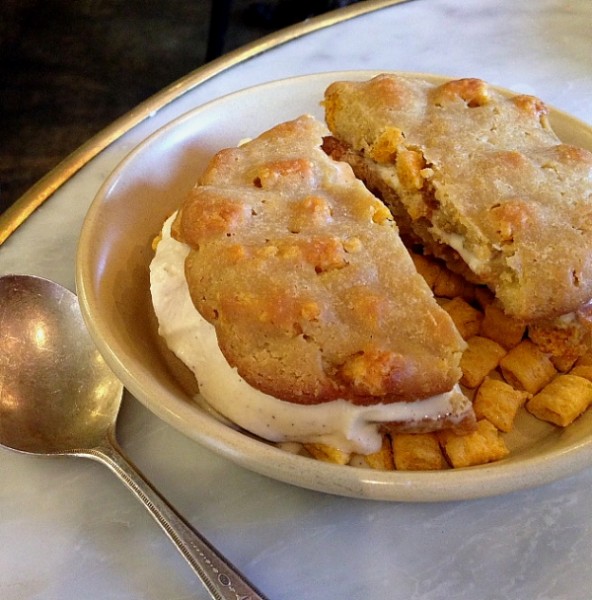 It was time to leave and head back to our hotel and get ready for an influx of relatives flying in for the wedding celebration, which by the way, will be a blog of its own soon.  But not before we had a cappuccino. 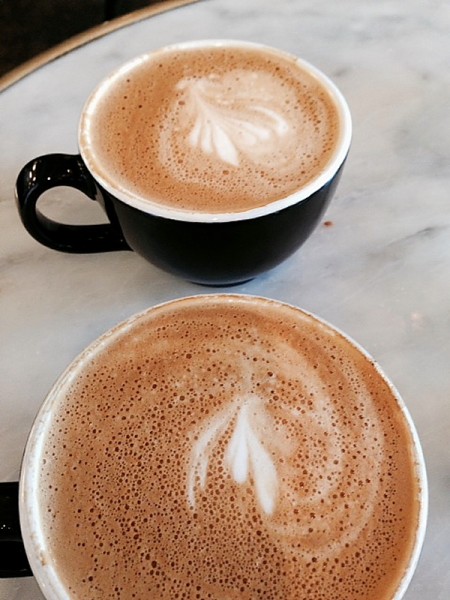 Next time we come, maybe Tyler’s text kitchen will be ready.  Oh- forgot to mention – he will also be offering cooking classes! 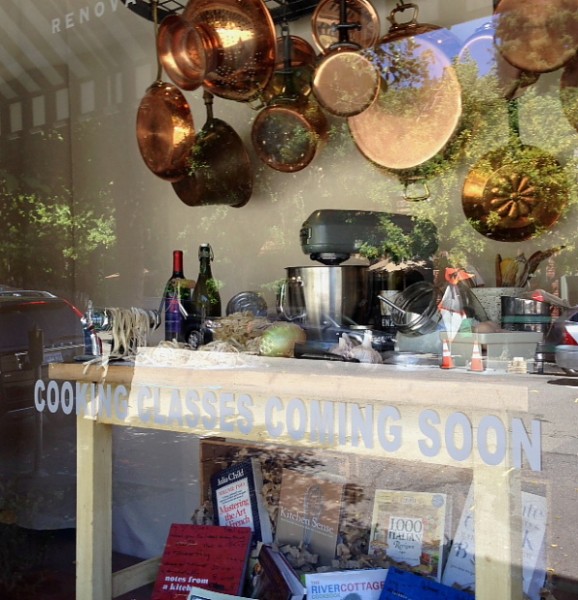 Yes, we’ll be back.  Hopefully the construction will be done, and we’ll check out Sweetwater again.  Maybe the Grateful Dead will show up.  And I must try that braised short rib slider with truffled mashed potatoes and pickled shallots next time.  Or maybe the Andouille sausage slider with sweet pasilla peppers and pimento.