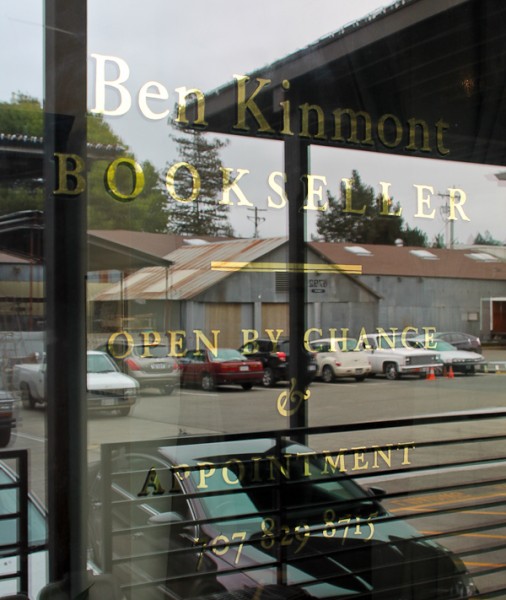 As my daughter Kristina and I were in the car driving from Point Reyes, California to nearby Sebastopol, I had a vision in my head of what Ben Kinmont Bookseller establishment would look like, and even how Kinmont himself would look.  Since he specializes in antiquarian gastronomy titles, I was expecting a rather old and maybe musty-smelling shop in addition to Kinmont being slightly antiquarian to match his surroundings.  Does “never judge a book by its cover” come to mind?  I couldn’t have been more wrong on both counts. 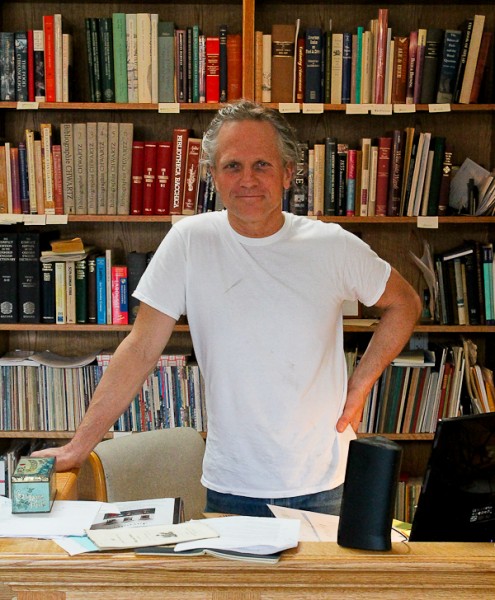 Not only is the store located in a hip and stylish area called The Barlow, filled with farmer’s markets, gourmet restaurants, coffee shops, and art galleries to name a few, but Kinmont is a handsome, fit, California beach-and-hiking-looking kind of guy.  He even had his dog greet us as we entered the non-musty establishment.  I only detected the aroma of coffee. 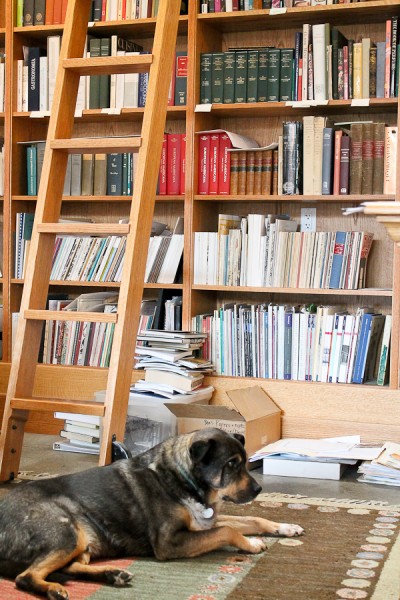 However, the beautiful antique furniture added to the ambiance for the 15th to 19th century titles, photographs, maps, and artifacts. 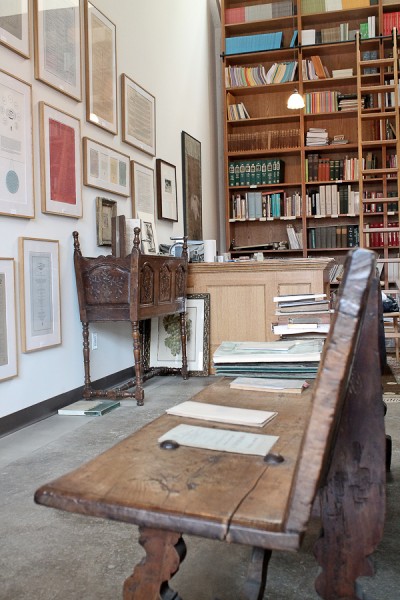 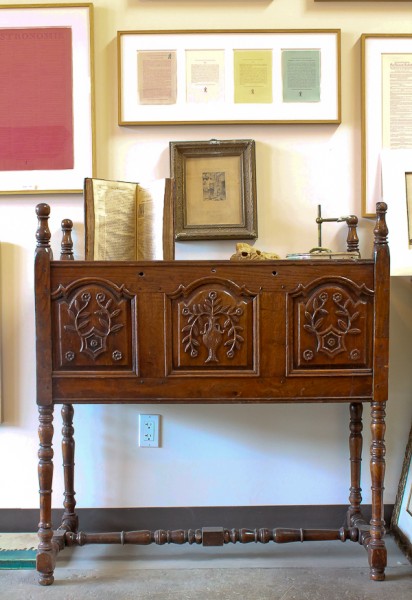 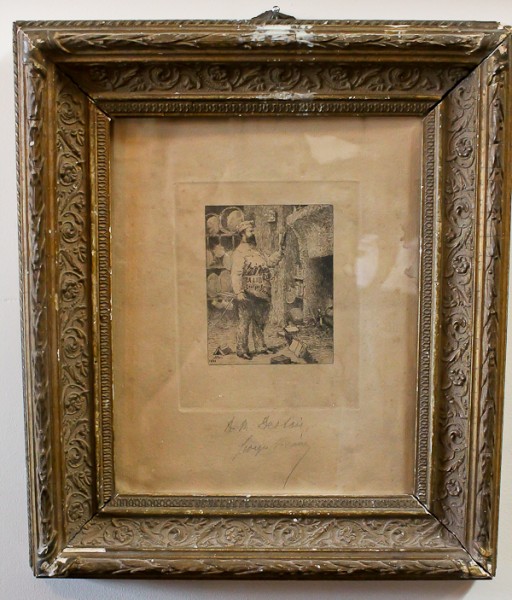 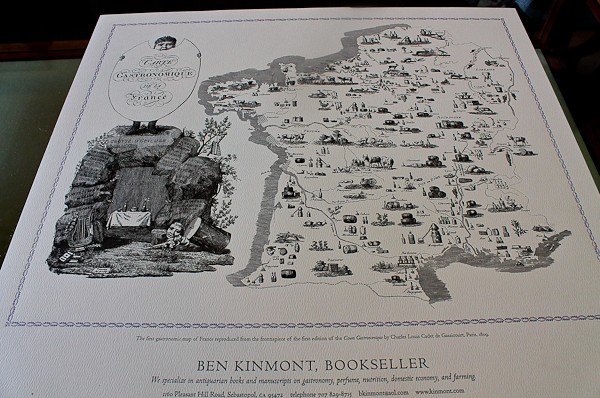 A Gastronomy map of France

Kinmont specializes in 15th to 19th century books about food, wine, health, history of taste, and even perfume. He attends all major gastronomy auction sales and participates in the world’s most respected book fairs in cities such as San Francisco, Los Angeles, New York, and Paris.  Kinmont also works with private clients and librarians from around the world with their own collection development, in addition to offering appraisal services of books, manuscripts, and archives.  He is a major force in the antiquarian book world after first learning his trade from New York dealer Jonathan Hill, an internationally respected seller of rare scientific works.  Kinmont embarked on his solo career in 1998 in his chosen field of gastronomy.  He naturally gravitated to this area as his mother wrote a cookbook for the Sierra club in the early ’70’s titled Simple Foods for the Pack, which still can be found on Amazon. (I bought one!) 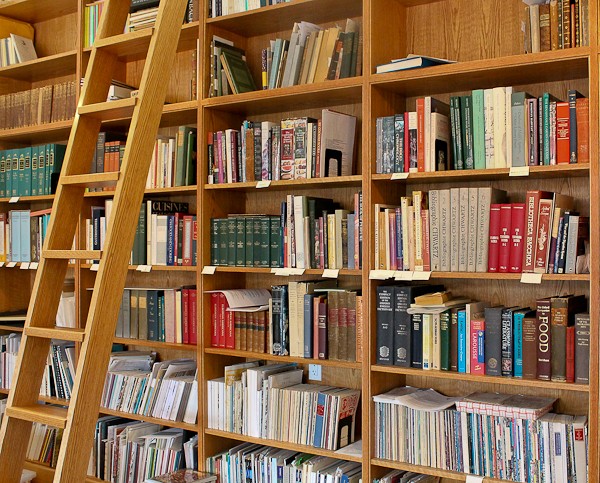 This is only a partial view of Kinmont’s research shelves.  He keeps up with everything.  There is such a huge public interest in restaurants, cooking, cuisines of all types, food and wine magazines, cooking shows and competitions, and celebrity chefs.  We need to remember that given this present interest of what we eat and drink comes from our past, interest in gastronomy will only continue to grow.  I was surprised to find that in this tiny French cookbook from 1775, there were ingredients used such as fennel, white asparagus, and artichokes. Cooks made roux and marinades.  Somehow I didn’t picture that 240 years ago. 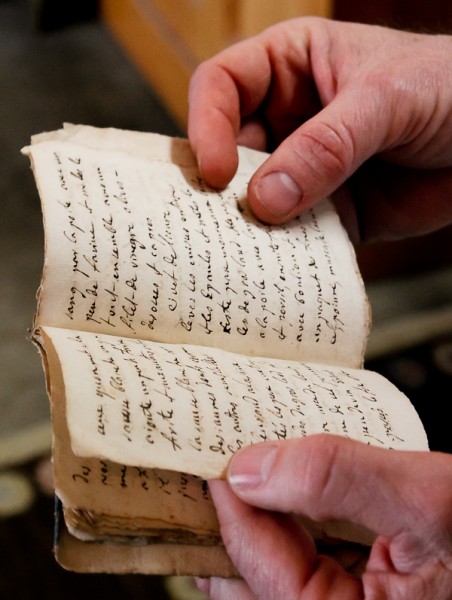 Another fascinating and very rare French book was from 1546:  “Ensuyt le pris que les poulailliers,” which is the earliest book about street vendors and the regulations they were required to follow. 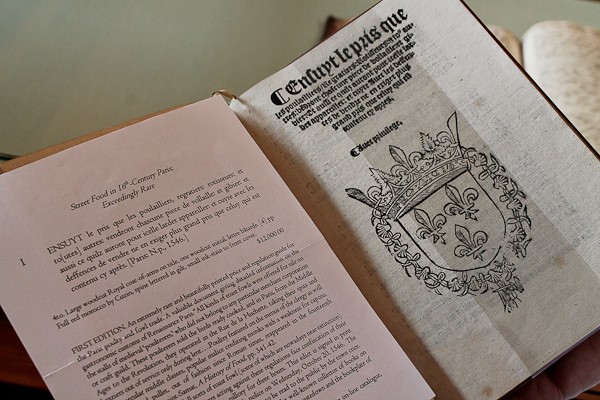 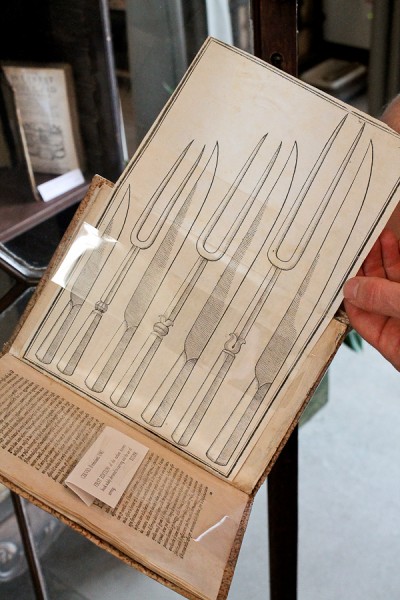 This is the first known book that was printed on the art of carving from 1581. 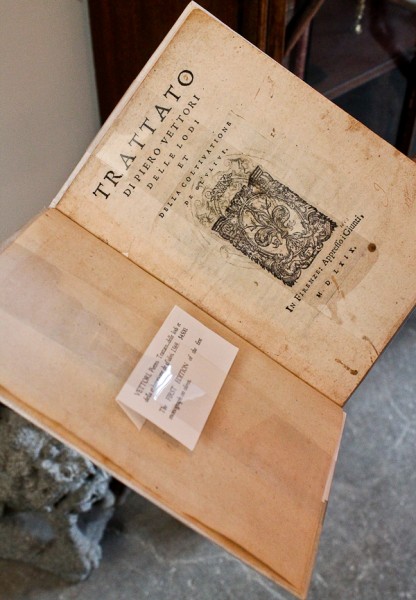 “Trattato…della coltivatione de gl’vlivi” by Pietro Vettori from 1569 was the first book on olives and their cultivation.  Vettori gives the history of olives, describes its culture and harvest, and explains regional varieties. There are recommendations on how to prepare olives with lemon or citron leaves, and even an area on table manners.

A large glass table in the center of the room held a breath-taking and very large manuscript cookbook, all written in the most beautiful calligraphy I have ever seen.  It was a new acquisition and Kinmont said he was still in the process of writing the description of this beautiful early 18th century English treasure. 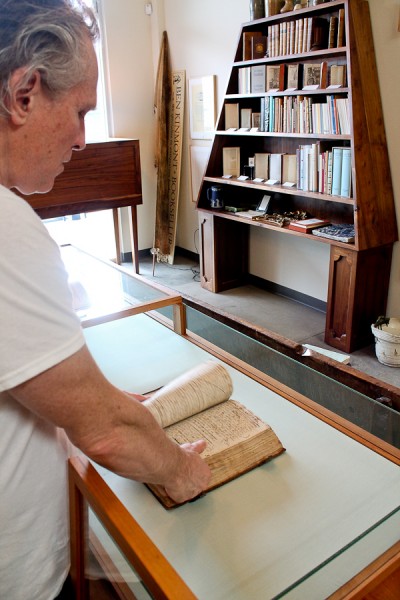 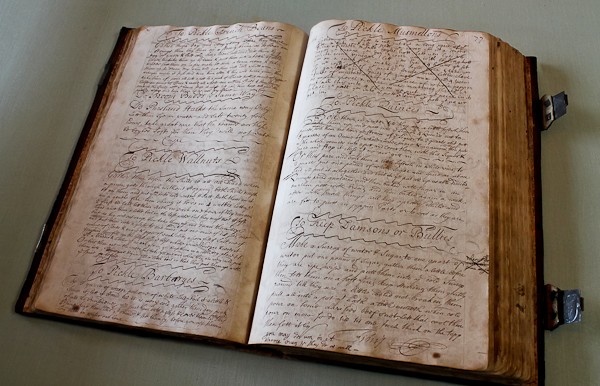 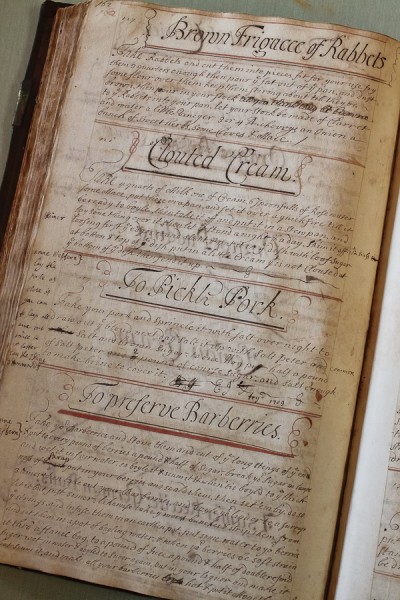 A stunning large glass case on one side of the room contained not only books but an array of culinary artifacts.  I had been peeking inside here and there hoping Kinmont would open it.  Alas, he walked over with a huge old key (naturally) and opened the cabinet. 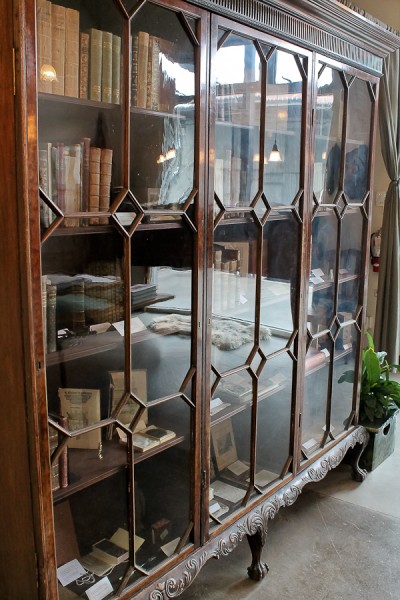 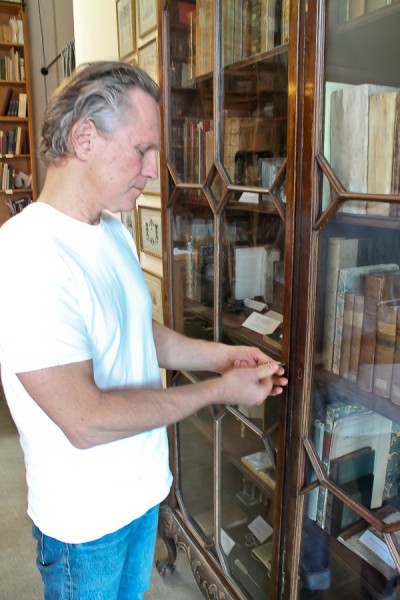 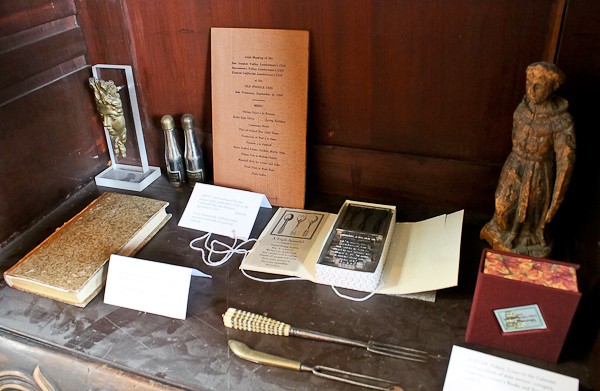 It was like a tiny museum.  However, I could not take my eyes off one particular item called a “Peep Show.” 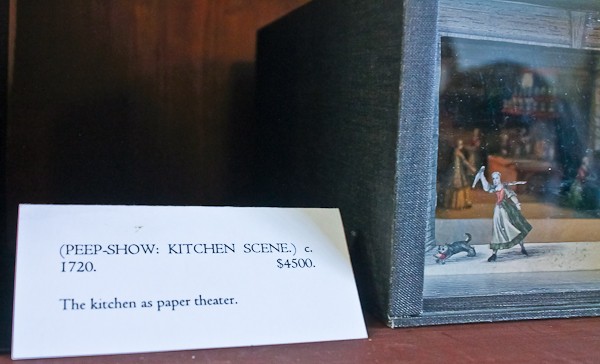 If I happened to have $4,500 hanging out in my handbag, I would have bought this on the spot.  I fell in love with it instantly.  Kinmont explained that in the 1700’s, people would entertain their guests with various kinds of peep-shows depicting all kinds of scenes.  It’s very delicate and seems amazing that it is so well-preserved. 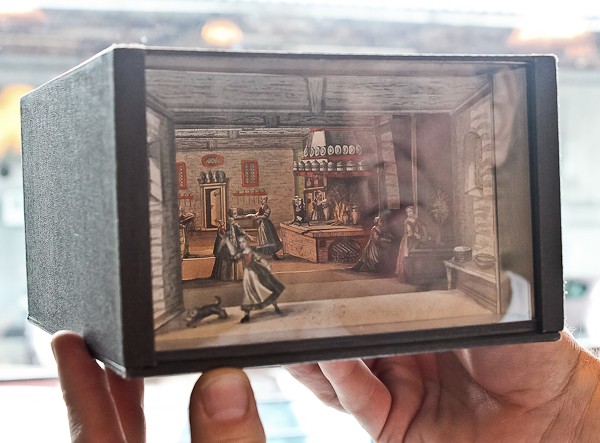 The scene comes alive when held up to the light. 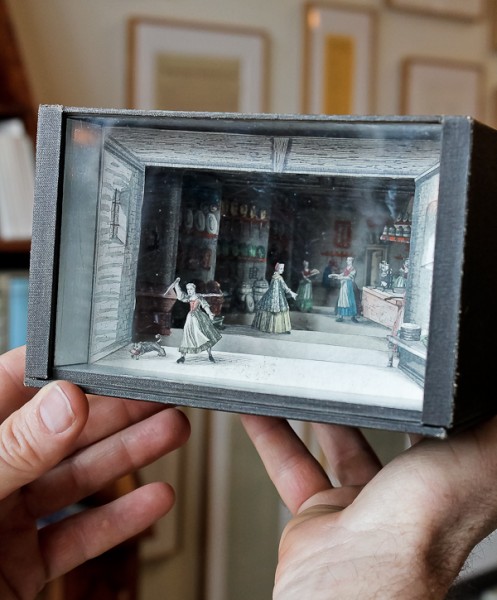 Maybe someday.  I love this so much…

As we prepared to leave, Kinmont gave us his business card and a postcard. 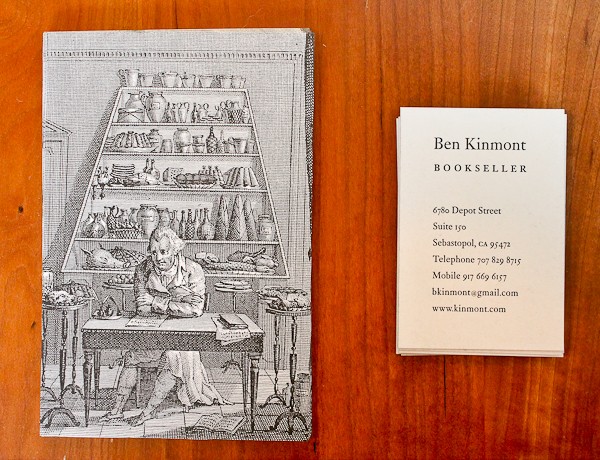 It was then that I realized he had made an exact replica of the shelving from the photo on the postcard.  How cool is that? 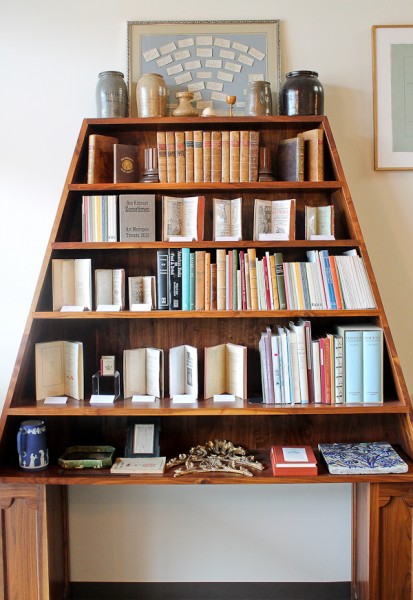 We could have stayed all day.  There is so much to see, touch, smell, and dream about.  I loved this place.  It felt like home.  I can imagine Kinmont feels the same way every day when he walks in.  These are his babies and he takes good care of them.  Thank goodness for us that he does.  We could all learn from Ben’s words of wisdom concerning his view of collecting antiquarian cookbooks:

“Collecting antiquarian cookbooks allows for time travel, an atemporal experience that takes you back to the kitchens and tastes of the past.  Unlike collecting science or literature, books about food offer an opportunity to make something “with” someone in the past, a shared authorship around a dish that can be eaten, in your kitchen.  In this sense, antiquarian gastronomy books are alive like no other subject.”

The world thanks you, Ben.

At The Barlow in Sebastopol
Celery-Blue Cheese Soup