My dad was a die-hard Chicago Cubs fan, but my Bill runs a close second.  I have had my fill of sports this weekend with the Bears losing to the Packers in a disappointing first game of the season. (As Bill said- who were those guys??)  Tonight as Bill is watching the Cubs (score is tied at this moment) he is over the Bears loss and moving on.  When there is too much sports going on, I go find a cookbook to look through it.

I have been wanting to look at this cookbook for weeks now.  My brother Alan and his wife Ellen, gave me a pile of books at the end of June, and I saved this one for last because it is so huge which makes it perfect on a lazy Saturday night. 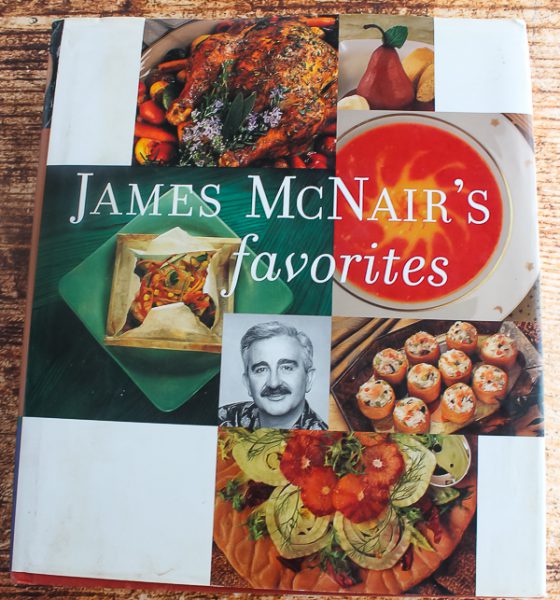 I have met James McNair a couple times at cooking contests and liked him so much.  He is chatty,  friendly, and writes great cookbooks.  I had many of his books but they were all lost in the flood, so I was thrilled to have this one, and it was one I didn’t have before.  McNair has written over forty cookbooks and is also an award-winning food photographer and food stylist.  He was the recipient of the first International Association of Culinary Professionals Award of Excellence in Food Photography.

This book is huge!  It is so fun to read and I am not even quite through.  He shares all his favorite recipes with chapters named Starting Out, Moving On, Big Adventures, Along the Way, Sweet Endings, and Back to Basics.  I love breakfast dishes and he has all the classics like pancakes, scones, omelets, waffles, granola, and sticky buns.  With Fall almost upon us, I am always on the lookout for comforting main dishes.  There is a recipe for a vegetable pot pie with a cream cheese crust, and a Chile and Chorizo Quiche, both which I am going to try in the next few months.  In the Breads chapter McNair has 15 different variations of cornbread!  That caught my Bill’s attention along with a chapter for his sweet tooth.  First one he requests is the Banana Pudding, one of his favorite desserts.  I’m leaning toward the Wine-Poached Pears filled with Mascarpone in Caramel Sauce.  I just heard Bill groan, so I think the Cubs lost.  I’ll have to make a dessert for him tomorrow to ease his pain for the Bears and now the Cubs.

Find this cookbook!  I think you will love it!

100th Anniversary of Bears and Packers
Another Gift from a Garden