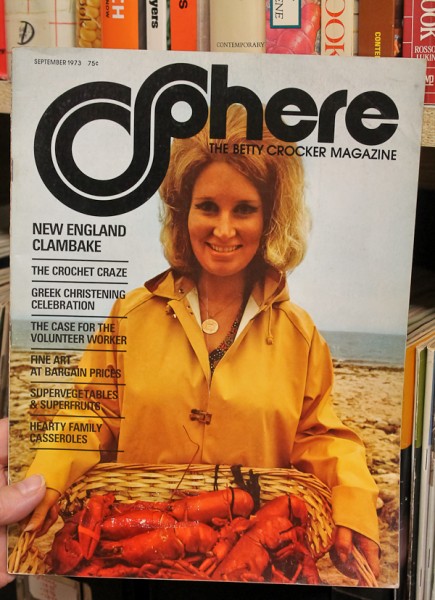 In every issue of the vintage Sphere magazines, there was almost always a section in celebration of an ethnic dinner.  It would include full menus and a timetable for preparation, table decoration ideas, history or interesting facts about the selected country or area, and even clothing to wear, sometimes with patterns.  In addition, even music (records, of course!) was available for purchasing to liven up your dinner party.  The theme for this issue was a Greek dinner party complete with Saganaki (flaming cheese), Avgolemono (lemon soup), Psito Arni (Roast Spring Lamb), Dolmades (stuffed grape leaves), Pastitsio (macaroni with beef and cheese), Spanakopita (spinach cheese pie), and Kouradiedes (crescent cookies).

The “Cape Cod Clambake” article gives full instructions from beginning to end on how to have a fun meal at the beach, an experience I would love to have someday.  I have never been to an authentic New England clam bake.

There were pages on the “Crochet Craze,” with everything from jumpsuits, hats, pillows and dresses, to even vegetables and fruits like carrots, clusters of grapes, and a bowl filled with crocheted apples and pears.  I remember in college in 1973, all the girls loved crocheted hats, scarves, and ponchos.

There are a couple pages of casseroles, the most interesting being a “Chowder Bake” that sounds like a bowl of whitefish chowder in casserole form.  The “Meatball Medley” article offers a basic meatball recipe to be split four ways and frozen.  When ready, each of the four have separate recipes for sauerbraten meatballs, Swedish meatballs, meatball soup, or an enchilada skillet casserole.

The section that captured my attention the most was cooking with almonds or almond extract, both which I love.  I decided to try the Almond Crunch Cream Pie since it used both of those ingredients.  The unusual almond crust is made from raw almonds with the skin, chopped fine and mixed with egg white, sugar, and almond extract.  It is pressed into a pie plate and baked.  The filling is simply a mixture of vanilla pudding, more almond extract, and whipped cream.  The pie is topped with more whipped cream and a sprinkling of toasted almonds, then chilled. 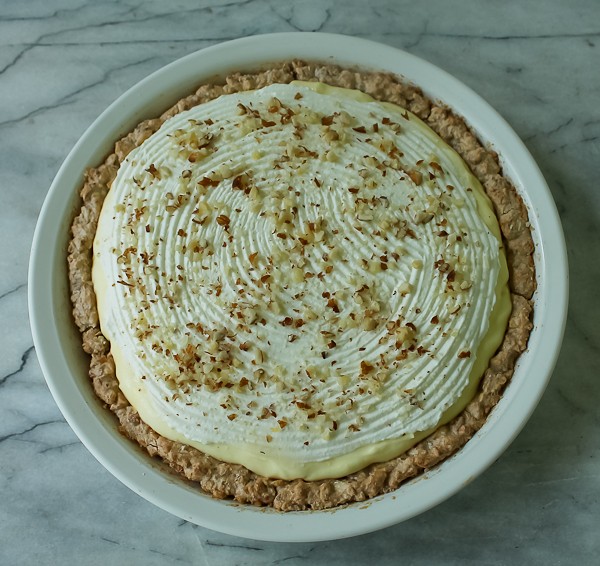 While the crust is still warm from the oven, you must take a small spatula and run it around the edges and pull up a little to loosen it.  Since it is made using an egg white, the crust is rather sticky and would be hard to cut after cooling, so don’t forget this step. 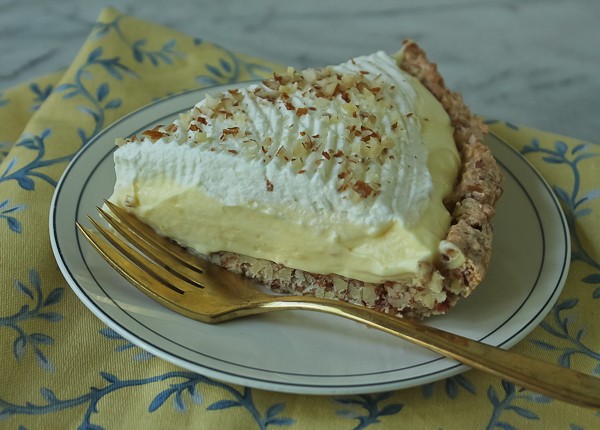 The whipped cream can either be spread all over the top or piped into dollops around the edges, whichever look you prefer.  Either way, it’s a beautiful pie and so creamy and good!  Cream pies made with pudding were popular back then and still are today, but I liked that this crust was just a little bit different from a pre-made graham cracker crust that is used frequently now, and thank goodness it’s real whipped cream and not the frozen stuff in the tubs.  Also, almonds are about 21% protein and contain iron, calcium, phosphorus, and B vitamins. Who would have guessed so much could be in a pudding pie?  Go a little retro and try it! 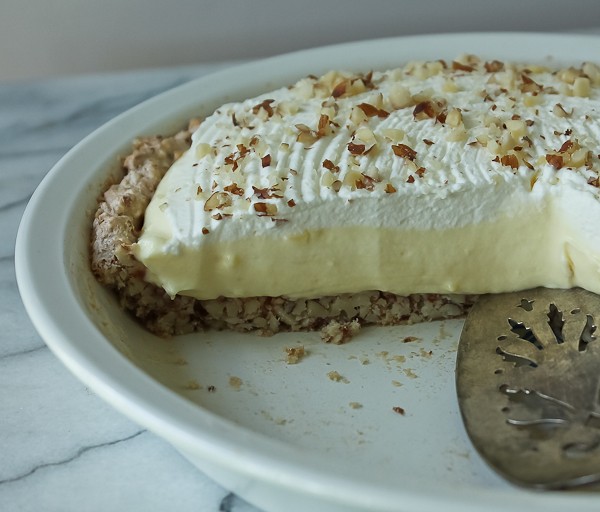