One food item my daughter Kristina says she misses about living in Los Angeles is Chinese Chicken Salad.  She said it was everywhere in LA, but for some reason it’s not as popular in New York City where she now resides.  As it turns out, there is an explanation for that.  It’s a very California thing, especially LA.

If you look at my earlier blog about the Hollywood Cobb Salad and its popularity with the celebrity crowd, the story goes along the same line, as you can thank actor Cary Grant for the popularity of the Chinese Chicken Salad.  A favorite celebrity hang-out in the ’60’s was Madame Wu’s and it was a favorite of Cary Grant.  He mentioned to Madame Wu that he tasted a delicious Chinese salad with chicken and noodles at another restaurant and asked if she could come up with something similar.  She vaguely remembered one from her days in Shanghai and developed a chicken salad with vermicelli, shredded chicken, green onion, and toasted almonds. The rest is history. 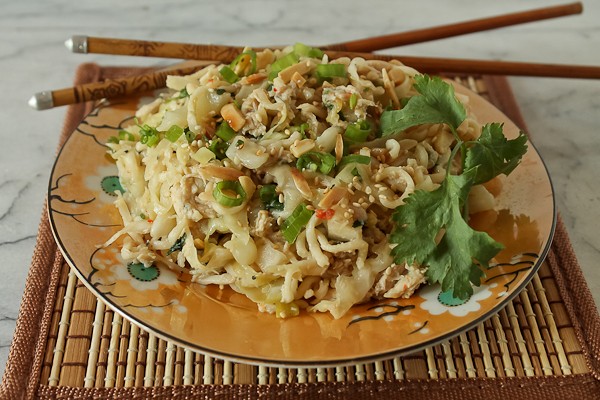 Other chefs have jumped on the bandwagon since then like Wolfgang Puck and his Chinois Chicken salad, and even fast food chain Wendy’s featured an Asian Cashew Chicken Salad.  Here is a version I adapted from a Marion Cunningham recipe.  I happen to like a little more kick in mine so I added cilantro and red pepper flakes. You can even add a dab of sriracha if you like.  This is one of those recipes where you can add some of your own favorites.  It’s a very easy and forgiving recipe.  I even cheated and used rotisserie chicken meat because it’s too hot to cook much today and I was lazy.  It worked fine. 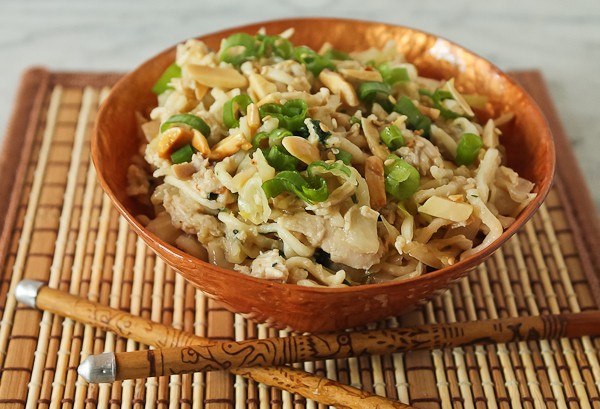 I even used Ramen noodles that cook fast (toss the seasoning packet though) and added toasted almonds, green onions, sesame seeds, cilantro, red pepper flakes, and made a seasoning with red wine vinegar, sugar, soy sauce, and some of the chicken broth that the noodles were cooked in.  So easy.  And now you have a recipe to work from, Kristina!  No more missing the salad in LA.  You can have your own.  Thank Cary Grant.