February 23rd is recognized as National Banana Bread Day.  There are many health benefits to bananas including a great source of potassium, fiber, Vitamin B6, and antioxidants.  One medium banana contains the daily recommended dosages of magnesium, copper, Vitamin C, and manganese, in addition to trace amounts of iron, zinc, iodine, and selenium.  There is a lot of goodness under that beautiful yellow peel! The arrival of bananas in the US was believed to have been in the 1870’s, but it wasn’t until the 1930’s that bananas started to appear in banana bread and other sweets. 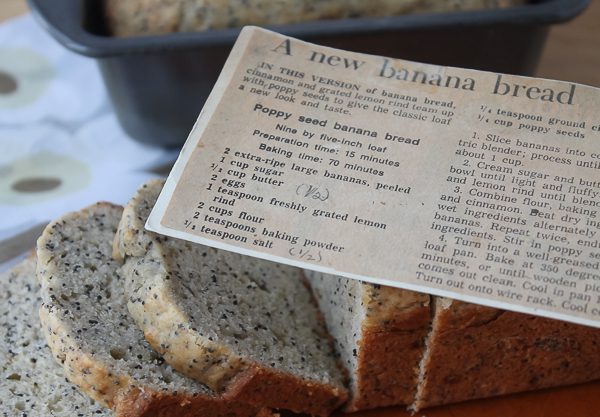 Unfortunately, I never met my mother-in-law, Helen.  She died of Parkinson’s disease about six months before I met my husband, Bill.  But she did leave behind a packet of recipes and a couple of cookbooks.  I found this old newspaper clipping of “A New Banana Bread” which was described as having cinnamon, grated lemon rind, and poppy seeds “to give the classic loaf a new look and taste.”  I wish there had been the year Helen cut this out of a newspaper, but whenever it was it sounds like at the time, poppy seeds were something different and exciting to add to banana bread.  Some of the amounts were barely legible as the print faded over the years, so I wrote them down before they were faded forever. 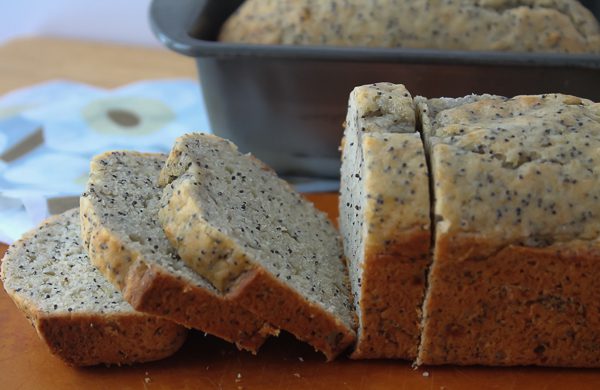 There are a million versions of banana bread and this is a goodie.  The recipe calls for it to be made in a 9-by-5-inch loaf pan, but I usually make it into three mini-loaves instead.  As most banana breads, the flavor and texture become even better if you wrap it in plastic and let it sit at room temperature for a day.  Bill usually gobbles up one little loaf fairly quickly, and I freeze the other loaves for another day.  They freeze beautifully.  The bread can be enjoyed plain, with smear of butter or cream cheese, or even lemon curd.  Whatever makes you happy.  I’m just happy to carry on some of Helen’s recipes.

Cookbooks From My Yooper Cousin
The Shockingly Wonderful Dorothy Reinhold