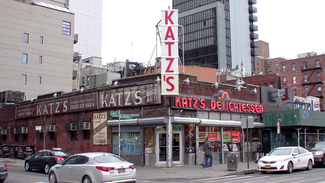 Our wonderful son-in-law, Robert, was a frequent visitor to the iconic Katz’s Delicatessen in New York City while a student at Columbia, and later lived there with his wife, our daughter Kara.  Now they live in the South where the best fried chicken can be found, but a great pastrami on rye isn’t the usual fare.  And when it comes to pastrami on rye, no one can beat Katz’s.

Katz’s has been a destination in New York City since 1888.  In the early part of the 20th century, the area of the restaurant was home to new immigrants.  Since there was a lack of public transportation at that time, people made Katz’s a neighborhood place to meet friends and family on the weekends.  Over the years it also became a meeting place for actors, singers, and comedians.

During World War II, the Katz family had two sons serving in the armed forces and would send them salami and other items from the restaurant.  It was so well received that they also encouraged their patrons who had men fighting overseas to “Send a Salami to your Boy in the Army.”  Katz’s continues to support the American troops today by arranging special shipping of gift boxes to U.S. military bases.

The deli has been the site of many movies and television shows over the years, the most popular probably being “When Harry Met Sally,” which is referenced on a sign outside of the restaurant. 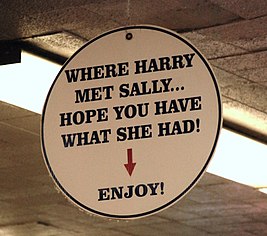 With Robert’s love of Katz’s food, especially the famous pastrami on rye sandwich, we decided a box of Katz’s items would be a fun gift for Christmas.  I went to their website and found that just about everything could be shipped! 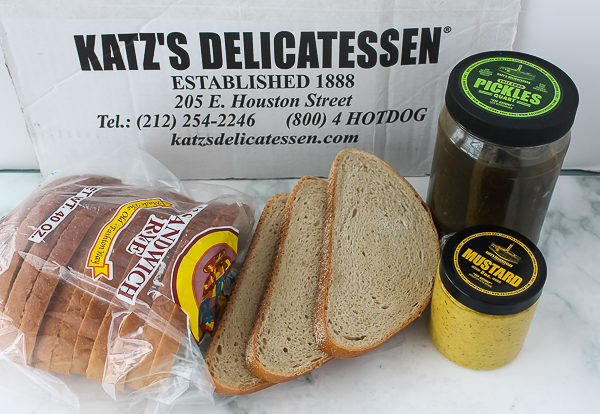 A huge box arrived with a very long loaf of rye bread, 2 jars of full sour pickles, 2 containers of mustard, and packages of pastrami, corned beef, and brisket.  I don’t have the meats pictured because they were vacuum-sealed and frozen, and then when it came time to heat them and enjoy everything, it was devoured so fast there was no time for a photo!  All that was left was a very small amount of brisket to make a half sandwich and not piled a mile high as it is served at the restaurant, but it was still fabulous. 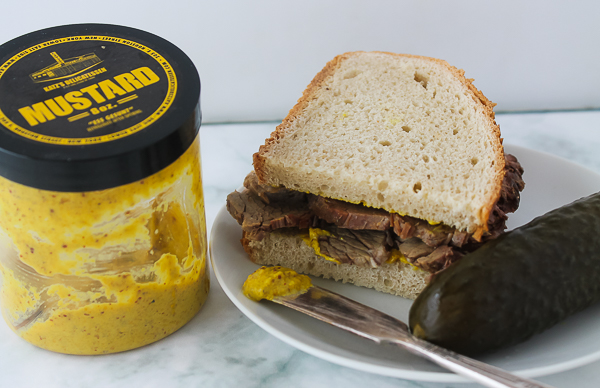 The jar of the delicious mustard was almost gone, and the pickles were the best I have ever had.  We decided this will become a gift for Robert every Christmas.  We enjoyed everything so much, and I have already decided that Bill and I will order some more for us before Christmas.  I am going to miss those pickles and the mustard well before next December!  If you decide to order the pastrami and/or other meats, be sure and follow their directions for reheating.  The meat is thawed in the sealed packages before heating.  Don’t open the packages; all you do is drop the sealed packages in boiling water for a short time, cut it open, and the meat is hot, juicy, and beyond good.

I forgot to mention that I also included a Katz’s hat for Robert, the happy daddy with our youngest granddaughter. 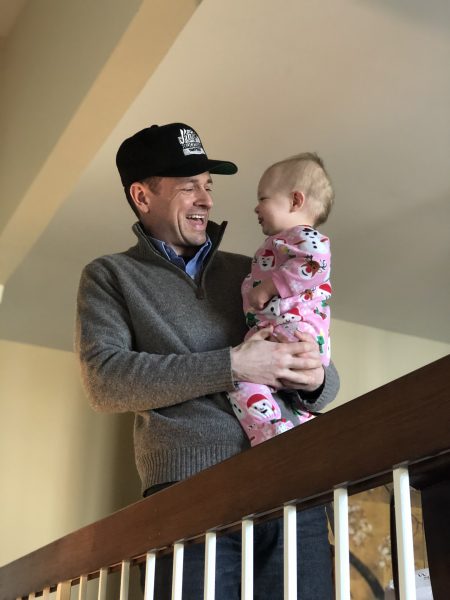 I think Robert was very pleased with his Katz’s meal.  We’re looking forward to next Christmas and doing it all again. It was fun to have a piece of New York City culinary history at own our table.  Thank you, Katz’s!