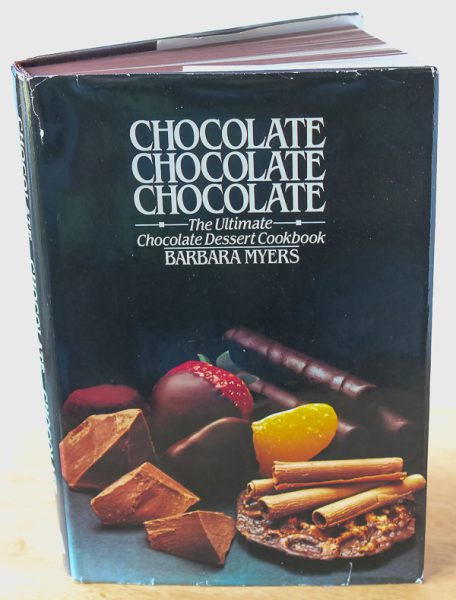 Craig Claiborne once said, “If there is one flavor that can cause Americans to salivate at the mention of the name, it is chocolate,” which means a book titled Chocolate Chocolate Chocolate should make someone out there faint.  Well, you just might after reading through this book by one of my favorite authors, Barbara Myers.  It has chocolate everything to satisfy any craving.

The basis for all chocolate is the cocoa bean.  The bean comes from the pods of a tropical tree, the cacao tree or the Theobroma Cacao, “The Food of the Gods.”  Cocoa pods actually look like an elongated squash, are cut from the tree and split open.  The seeds (or beans) inside, as many as 25 to 50 per pod, are scooped out and fermented to remove the bitter taste and let the essential oils develop.  The beans are then dried and shipped out to a manufacturer.  Since the differences in quality and type result from the treatments given to the cocoa beans during this processing when the manufacturer takes over, this is where chocolate can taste cheap or it can taste like the food of the gods.  Use good quality chocolate for these recipes.

Before the flood last summer washed away all my cookbooks in The Culinary Cellar, I only had one Barbara Myers book called Christmas Entertaining.  The book is worth finding if only to get the recipe for her Dresden Stollen.  It actually survived the flood for the most part.  It is still intact and the pages turn, but the pages are also a little bent out of shape.  I found a new copy but couldn’t bring myself to throw out the original.  If I had any books that survived, they were kept just because they survived, even if they didn’t look quite the same, plus I didn’t want to lose all the notes written in the margins.  It was my love of that book that led me to find Barbara Myers’ other cookbooks, including Christmas Cookies and Candies, Great Dinner Parties, Woman’s Day Old-Fashioned Desserts, The Chinese Restaurant Cookbook, and of course the chocolate one.

The first recipe I decided to try from the chocolate book is called “Evil Spirits.”  It is a chocolate mousse that also uses creme de cacao to heighten the flavor and give it a “spirited” lift.  It only has four ingredients but they turn into such decadent bites, the mousse is served in little pots de creme cups or demitasse cups.  I look for any excuse to use my demitasse cups that I’ve had for ages, and the dainty and beautiful demitasse spoons that my mother bought in Copenhagen in the late 1950’s. 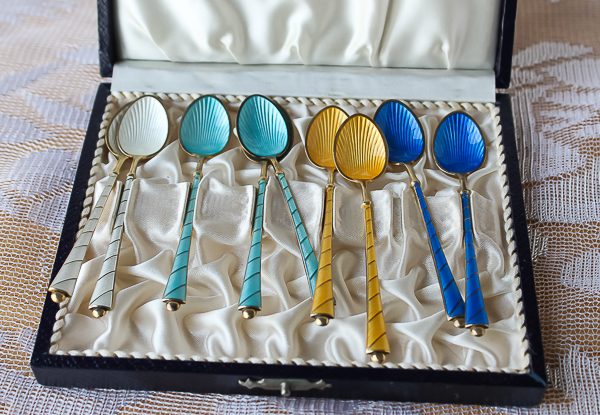 I played with these spoons when I was a little girl and still love them.  They are among my favorite items I have of my mom’s. There used to be three of each color, but over the years and several family moves, they were somehow lost. 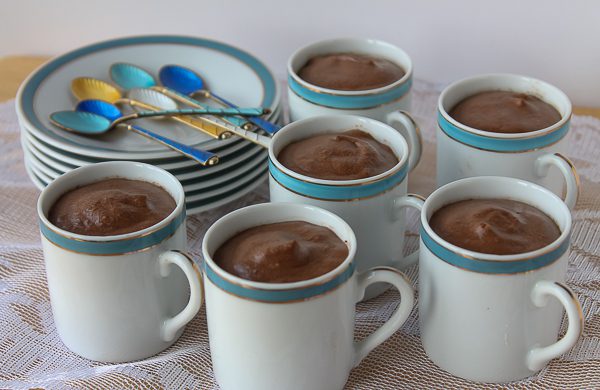 Look how tempting and elegant this dessert looks!  Barbara Myers says not to garnish the mousse since anything, even a spoonful of whipped cream, will interfere with the velvety texture. 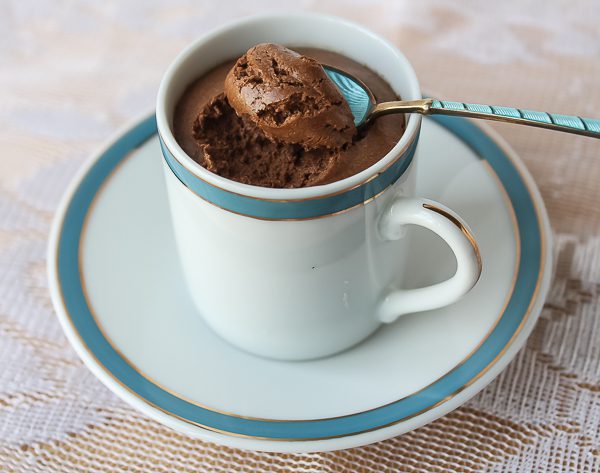 Each serving is only about 1/3 to 1/2 cup but is so rich, you won’t need any more.  Plus it’s great to serve if you have a large dinner.  Just a bite of dessert like this is the perfect ending. 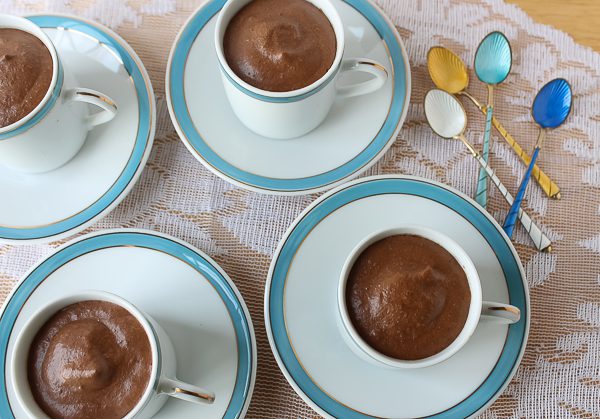 The cookbook has many rich and decadent recipes that you won’t know where to start.  It begins with a useful chapter on the kinds of chocolate- liquid, solid, or powdered, and for what purpose each is best, then instructs how to create garnishes and decorations with chocolate.  Read on to find recipes for layer cakes, loaf cakes, cupcakes, specialty cakes and tortes, cold desserts, frozen desserts, hot desserts, pies, tarts, specialty pastries, cookies, and confections.  If you read an earlier blog about an orange marmalade steamed pudding I made and loved, I was very excited to find a chocolate steamed pudding with rum sauce in the hot desserts chapter. That recipe is on the list to make.

I made this mousse for my birthday dessert last weekend.  I actually enjoy making my own birthday cake because I like to try new recipes.  I usually make cakes and almost made the Buttermilk Chocolate Layer Cake with Strawberry Jam Filling and Butter Cream Vanilla Frosting from the book, but the mousse was calling my name.  I’m so glad I did.

The mousse has to chill at least 6 hours but overnight is better, which makes it a great recipe for a party.  How many it serves depends on the size of cups you use, but count on about eight.  It was also nice to only have room for one candle so no one knows your age! 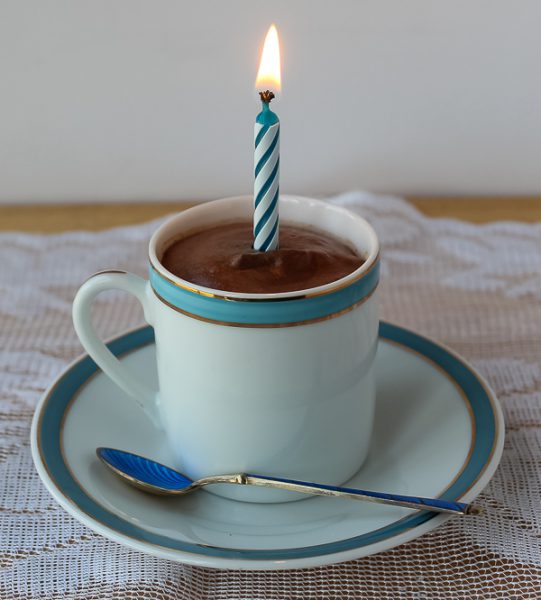 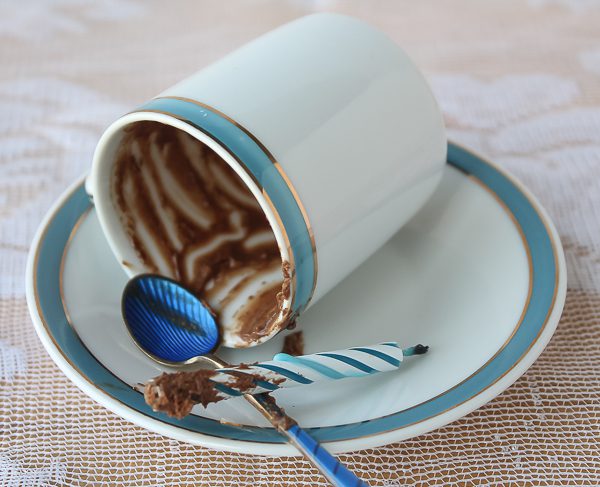 One last thing.  Many people avoid dishes such as this one because it uses raw egg yolks and whipped egg whites.  If you are uncomfortable about eating raw eggs then just don’t make this recipe!  There are many recipes using raw eggs that people have eaten and don’t even realize it, like Tiramisu, Spaghetti Carbonara, steak tartare, mayonnaise, and of course, raw cookie dough which most people have had at some time in their life.  Here’s an article to read if you want to learn more about cooking with raw eggs.  I have never become ill eating foods with raw eggs, and that’s a long time and hundreds of recipes.  Everyone has to make their own decision on this subject.

One Response to Chocolate, Chocolate Everywhere