Cookbooks from a Former Co-Worker

I think it’s always interesting to read about peoples’ jobs when they were young, and how as adults, it led them to where they ended up later in life.  Sometimes they are related, sometimes not, but somehow weirdly connected.  Case in point, as a teenager I did the usual baby-sitting, but also had food-related jobs.  My first one was a summer job at an ice cream parlor scooping up all the flavors to local residents coming in for a cold relief from the hot Oklahoma sun.  One of my early customers was a football coach at my newly built high school.  He stepped up and I saw the writing on his shirt that he was one of the new coaches.  For some reason this made me very nervous that I had to serve him, especially since he asked for a shake and I hadn’t had much experience yet using the big machine.  He was very friendly and chatty so I mentioned that I was one of the cheerleaders that would be at all his games, while at the same time, I was preparing his shake.  This distraction led me to not place the lid on tight enough.  I pushed start and the coach’s shake ended up all over his brand new coaches shirt and some on his face.  I was mortified.  Lucky for me, he was also the nicest man who just grabbed a handful of napkins and cleaned it up and gracefully smiled and told me it was okay.  I think he could see I was about to cry.  When school began, I once passed him in the hall and he said, “Hello, ice cream girl!”  His shirt cleaned up like new, by the way,

Next summer job went from cold ice cream to hot fried chicken.  It was a chain called “Minnie Pearl’s Fried Chicken” named after the famous country comedian.  Minnie Pearl was a regular at the Grand Ole Opry for more than fifty years and on the popular television show, Hee Haw.  I didn’t burn anyone with the hot oil for frying, but I smelled like fried chicken all summer.  I quit when dogs started following me thinking I had something to eat.  Just kidding.

After graduation from high school I went on to college and got a Bachelor of Science Degree in Dietetics, Nutrition, and Food Science.  What I had wanted to do after graduation was find a job at one of the big food companies around Chicago where I now lived as a newlywed.  My dream was to work in a test kitchen developing recipes for the company’s products.  I applied at Kraft, Sara Lee, Quakers Oats, and more, only to be told at each one that to work in a test kitchen I needed experience and they didn’t hire those right out of college.

I started reading the want ads and found and ad at our county Health Department for a job with WIC, the national food program for Women, Infants, and Children. I was so happy to be hired.  I worked in an area with three other people; my boss Sharon, fellow nutritionist Inger (who we called “Ingie”) and Haydee, who was Sharon’s assistant and our Spanish translator.  I instantly liked these lovely ladies and looked forward to work each day.

My job and Ingie’s job was to travel to various sites around the county signing up women for the food program.  We interviewed each mom, made sure they qualified under the federal guidelines, and signed them up to receive diapers, formula, and food items.  We advised them on healthy meals for themselves and their babies and toddlers.  If they couldn’t speak English, Haydee was our translator.

Now let’s fast forward many years later.  I left the job when my first daughter was born.  Over the years, I lost track of my co-workers as we all moved.  I don’t remember who contacted who first, probably on Facebook, but I first heard from Haydee.  I was so happy to hear from her, and when she learned that I lost my Culinary Cellar to a flood, Haydee was one of those generous people who sent cookbooks, but Haydee sent even more than that. 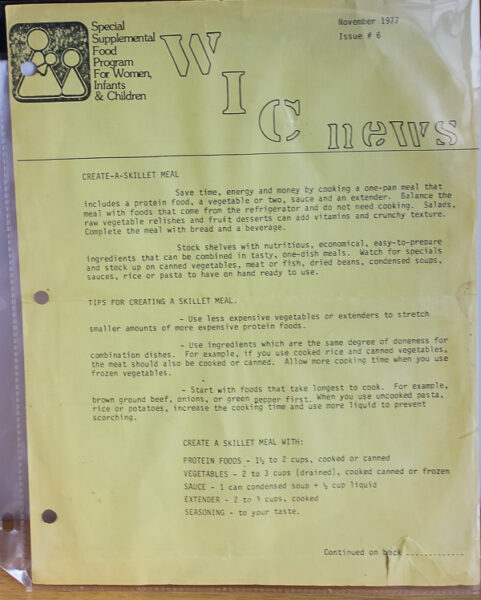 While working at WIC, I wrote some of the WIC newsletters to hand out to clients.  Haydee still had one of the old issues and sent it along.  It was fun to see one of them again! 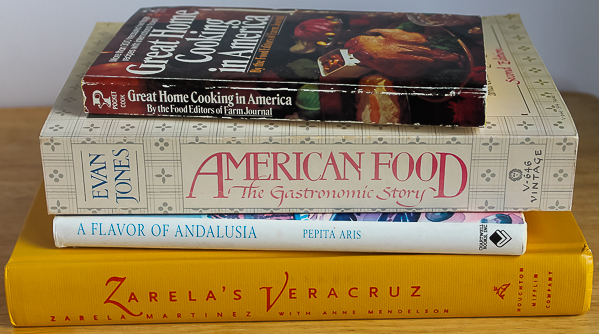 Haydee also sent a box of  wonderful cookbooks to start the new Culinary Cellar library.  I became fascinated with “A Flavor of Andalusia,” and “Zarela’s Veracruz,” which were books I had never seen before.

Not only those items, but she also enclosed beautiful handmade bookmarks with tiny cooking and kitchen items.  The photos don’t do them justice – they are so beautiful and made with such care and love. The items on the bookmarks are hand-crafted Mexican miniatures that Haydee collected over the years.  Haydee also makes lovely jewelry.

When looking for a recipe to post with the blog, I selected the Veracruz because that’s where Haydee and her brother were born.  Year later, Haydee found the Veracruz cookbook at a second hand bookstore in Washington state where she now resides.  After going through the  book, Haydee said she could hear her mother’s voice through the recipes talking about the food.  I wanted to honor Haydee’s beloved mom and Haydee’s generosity for the book.  It’s one of my very special books on the cookbook shelf. 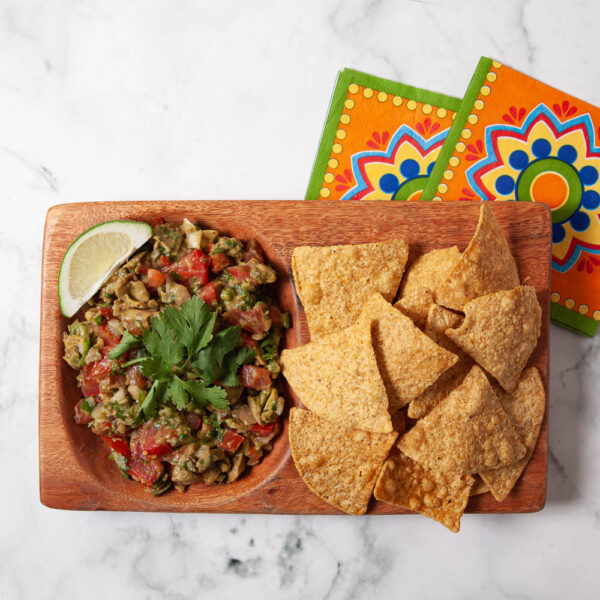 There are so many great recipes in the book, I didn’t know where to begin.  You will be seeing more recipes in future blogs.  I decided on one that sounded so good for summer parties and something everyone loves and makes often – salsa with chips!  This one is called “Coctel de Aguacate.” an appetizer in Veracruz traditionally served in goblets, or as a side dish.  It’s easy to make and so good with avocados, jalapeños, tomatoes, cilantro, onion, and lime juice, all very fresh and colorful.

Thank you, Haydee, for sharing your heritage with me, and for the bookmarks I will always treasure, and the blast from the past WIC newsletter.  I am so glad we are connected again, and with Ingie too, because I want some of her Swedish cookie recipes!  They were so good.  Here’s to our past time together and to our friendship that will be with us always. 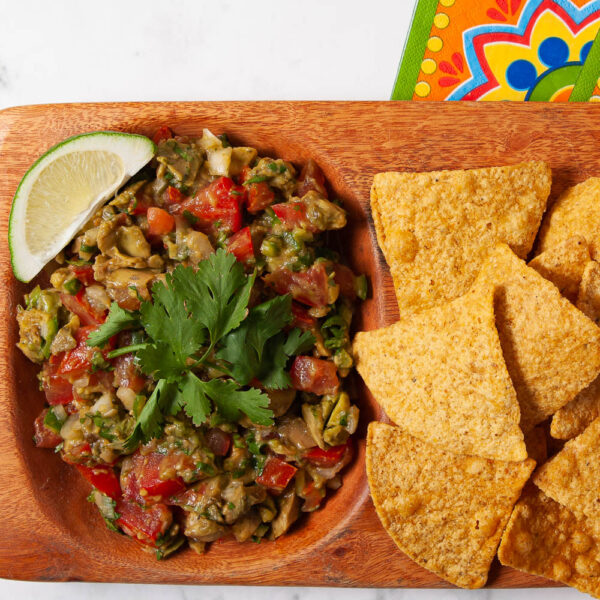 2 Responses to Cookbooks from a Former Co-Worker