I would be remiss if I didn’t post one of mom’s oldest recipes in honoring her this Mother’s Day week of recipes, this one being “Barbeque Meat Sandwiches” which we now call Sloppy Joe’s.  I have made this family favorite so many times that I have it memorized.

I remember mom telling me that a friend of hers named Edwina gave her the recipe because she made it one time when Edwina and her husband invited my mom and dad over for dinner not long after they were married during the time of World War II. My dad apparently loved the sandwiches!  Mom said she didn’t have a lot of written recipes at that time, but wanted to start a file of meals to make when my dad would come home after the war ended.  This was one of her first recipes to be placed in a recipe box, and it still remains just as Edwina wrote it in the 1940’s, except of course it is now yellowed and frayed on the edges. 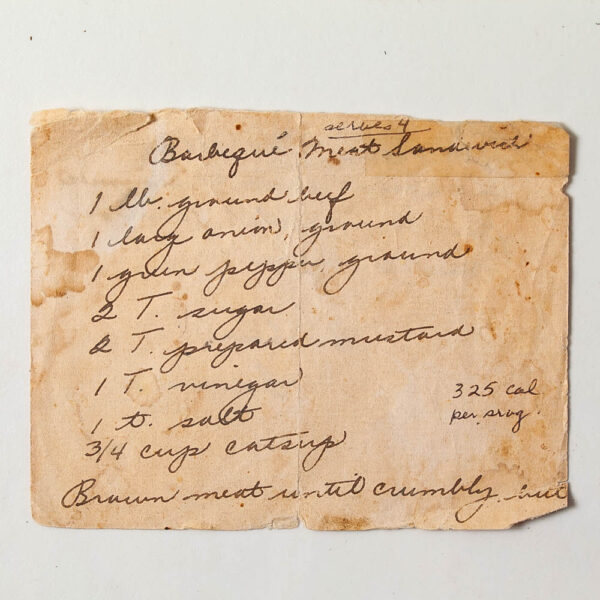 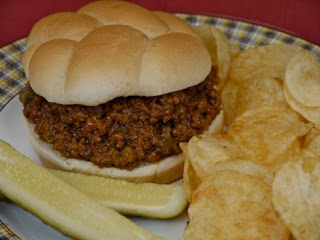 This is how my husband Bill likes his sandwich, with extra meat mixture, potato chips, and pickle spears.

I have wondered where Edwina originally found this recipe, maybe from a newspaper, friend, or maybe it was a favorite in her family too.  No matter where it originated, it has certainly been a favorite for many people through decades, and is now passed on to my girls who also make it.

7 Responses to A Young Bride’s Recipe