The very first meal I make the day after Thanksgiving is our family favorite of homemade turkey and noodles in a turkey broth that starts simmering first thing in the morning.  I learned to make these noodles from my great aunt Margie from Iowa when I was a young girl.  You don’t need a pasta machine, just a rolling pin.  The noodles are thick and chewy and wonderful.  No worrying about al dente or cutting perfectly.  Just good ‘ole Iowa goodness. 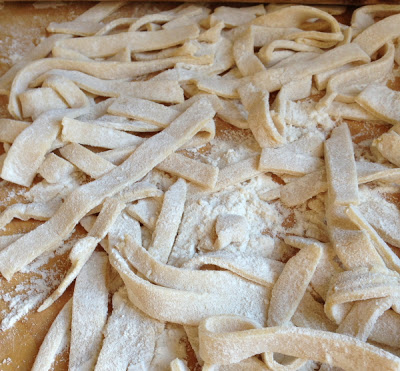 For turkey stock, I pick off any leftover meat from the bones and save to put in with the noodles, then place the bones in a stockpot.  I’ll throw in a halved onion, a few carrots, several celery stalks with the attached leaves, a small handful of parsley, a bay leaf or two, and a few sprigs of fresh thyme.  I’ll add a couple containers of chicken broth, then add enough water to cover the bones.  Bring to a boil and let it simmer for at least several hours.  I taste for salt or pepper when it’s done.  Sometimes it doesn’t need any.

To make the turkey and noodles, strain the broth into a Dutch oven or large pot and bring to a boil.  Add noodles that have been made earlier in the day and simmer until done.  Add pieces of leftover turkey meat and some leftover gravy if you have any.  It adds a lot of flavor and will thicken it too. 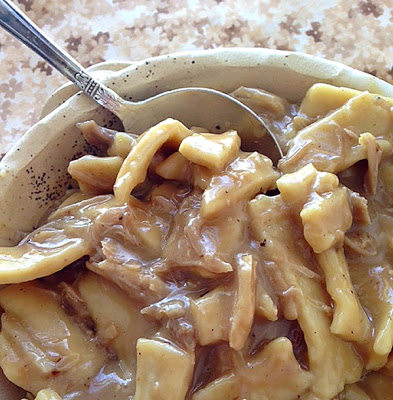 Remember you can also make chicken and noodles from a leftover roast chicken, or beef and noodles if you make a stock from meaty beef bones.  Homemade broth is always the way to go with homemade noodles.

One Response to Our Favorite Thanksgiving Leftover