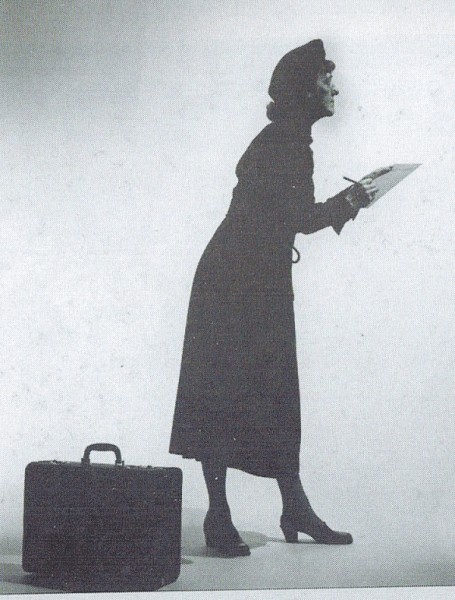 In February of 1968, shortly after the death of Clementine Paddleford, Kansas State University sent two librarians to her apartment on the Upper East Side of New York City.  Clementine, a Kansas State graduate, bequeathed her estate to her alma mater.  The items arrived safely back in Kansas, but then for thirty-four long years, unbelievably,  the materials sat undisturbed gathering dust.  Except for a few relatives, no one came to look.  How could this happen to America’s first traveling food writer who almost single-handedly changed the culinary landscape of America?  The complex answers are many.  To start with, Clementine’s family was very private and not willing to talk for a very long time.  Many of Clementine’s co-workers died themselves, and add to this the emergence of television.  Julia Child was one of the first to embrace cooking on television to the American audience.  Julia was introduced when Clementine was aging and with a voice that would not transfer well to the little screen due to her throat cancer.  Clementine opened the doors to everyone even if she could not complete the journey herself.  And think of this – there were no computers to archive Clementine’s articles to make it easy to research her decades of hard work.  Not many had even heard her name, much less knew what she had accomplished.  How could anyone have researched Clementine when practically everything about her was sitting in boxes for thirty-four years?  And sometimes, libraries simply don’t have the funds or full-time collection processors to take on the task.   Thank goodness Kansas State decided to have archivist Cindy Harris bring Clem back to life.  Had Clementine not saved every scrapbook,  notes, cookbooks, photos, and even receipts and menus, a part of culinary history could have been lost.  Clementine actually took the step to her own mortality by saving everything. 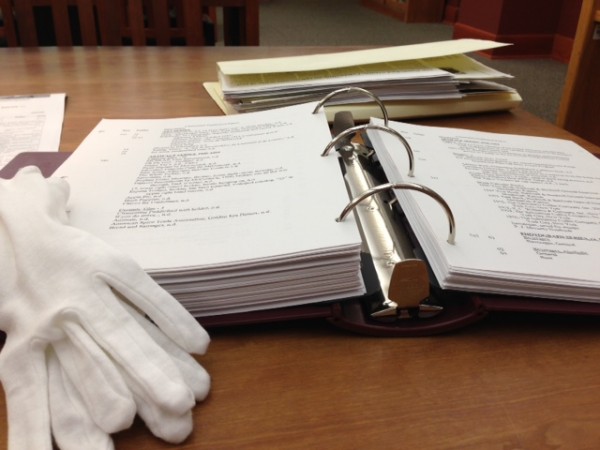 Thoughts of sitting in front of the many archives of food writer Clementine Paddleford and donning the white gloves, still gives me chills.  To be able to touch her personal effects sent a charge through me that I will never forget.  Seated beside me along the way was Cindy Harris of the Special Collections in Hale Library of Kansas State University.  Cindy spent 3-1/2 years of her life archiving the life of Clementine.  Besides Clem’s family, I don’t think anyone knows her as Cindy Harris does.  I thank Cindy for allowing me to enter the fascinating life of Clementine and I hope to return at a later date to research even more.  It would take months to view everything.  Clementine would have been 115 years old this year, so I asked a “what-if” question of Cindy.  What if Clem were alive and active today – would she embrace the internet and all the social media, or would she stick with her little black book of notes, the old-fashioned way?  Cindy quickly replied that Clem not only would have embraced it all, she would have been at the forefront, and probably once again be ahead of her time and blow everyone else away.  I can only imagine how Clem would have loved writing her columns on a computer, sending out tweets throughout the day to talk about the latest food fad, having thousands of followers on Facebook, and basically being the person everyone trusted in the food world.

In the course of writing the Clementine blogs, there were several photos not included that I would love to post now to show her adventurous life.  In spite of all her health problems and life challenges, Clem had a sense of humor and was a fun-loving and generous person.  I hope her spirit will come through in the photographs.  I hope that the Clementine blogs will encourage readers to begin their own research on this iconic hero, and Hometown Appetites by Kelly Alexander and Cynthia Harris is a  must. 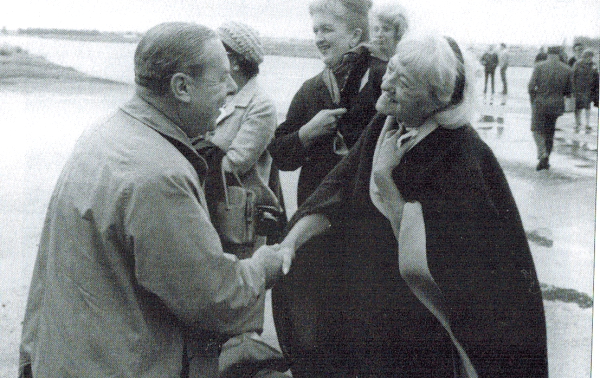 Meeting the president of the Olive Association in Spain.  I love the look on her face. 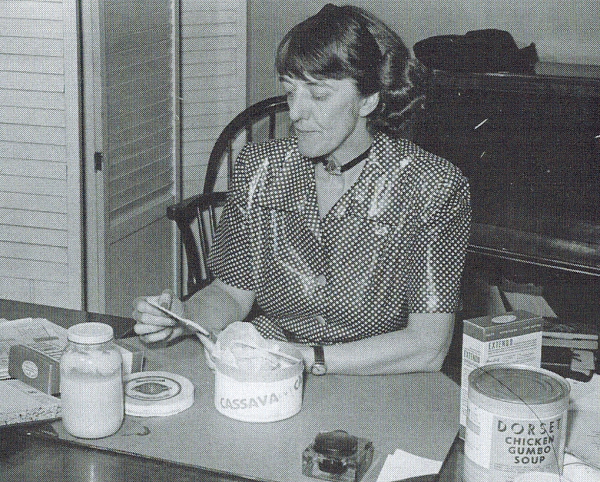 Tasting and learning about new products for her readers. 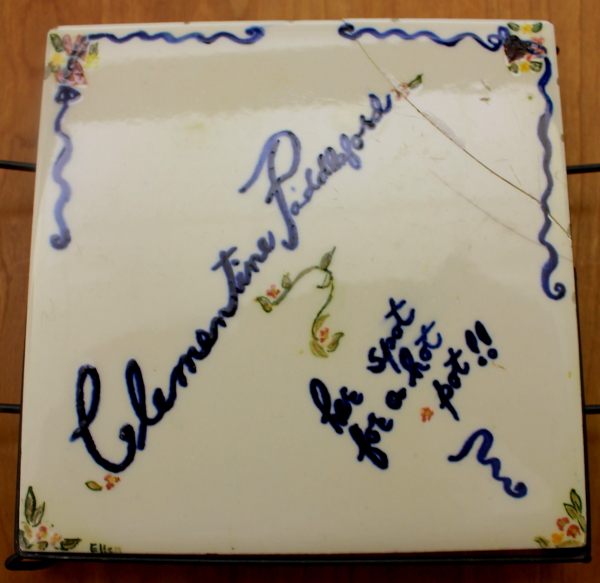 A hot plate someone made for Clementine.  She has a beautiful collection of tiles. 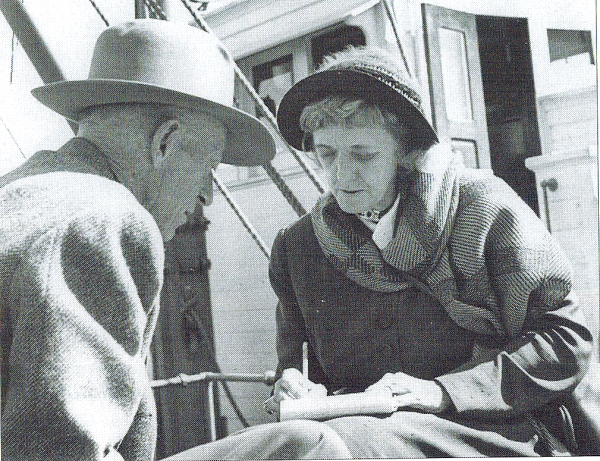 Clem conducting an interview in the “new” state of Alaska, in Ketchikan.

Having fun exploring on a scooter! 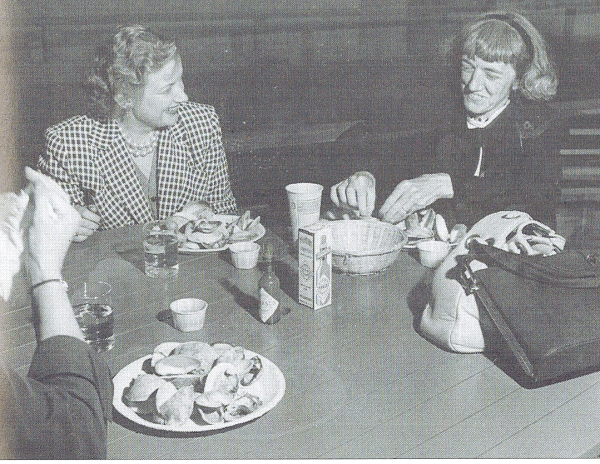 Learning about clams for her readers. 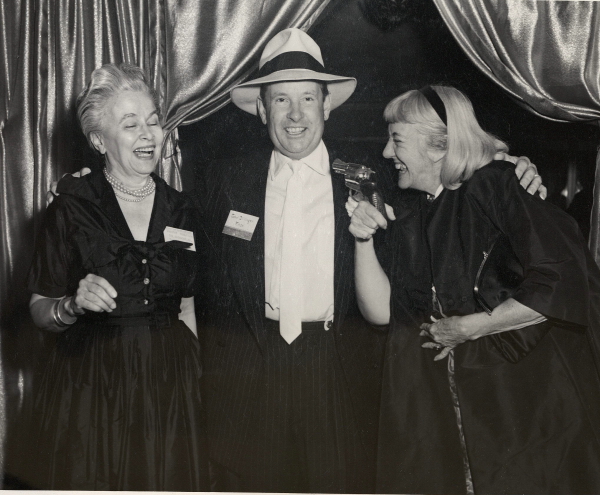 Another one of my favorites:  Clem playing FBI Agent at a party, where she is supposed to be arresting “John Dillinger.”

Here’s to you Clem.  You will never be forgotten.